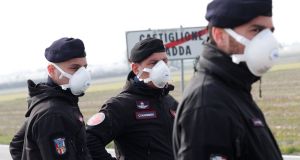 Italian carabinieri officers stand guard outside a town closed by the government due to coronavirus. Photograph: Guglielmo Mangiapane/Reuters

Italy has responded to the arrival of multiple cases of coronavirus by putting towns under lockdown, closing schools and sending restaurant customers home early. Could the same happen in Ireland if the disease were to arrive?

Ireland is currently trying to prevent the spread of Covid-19 to these shores, it seems successfully so far. Therefore, the situation is quite different from that in Italy, for now at least, where 270 cases and seven deaths have been reported.

Yet even in this containment phase, the cancellation of mass gatherings in the State “may be justified in exceptional circumstances”, according to a technical report on measures to delay and mitigate the coronavirus drawn up by the European Centre for Disease Control.

It gave the example of large conferences with a significant number of participants from a highly affected area, but says the decision to cancel will need to be co-ordinated with the organiser and public health authorities on a case-by-case basis.

During a containment phase, school closures “are not justified”, the document states. “There are also no data to support informed decisions on proactive school closures in terms of their anticipated effectiveness in mitigating the ... epidemic, due to the unknown level of transmission of this virus among children.”

However, should transmission of the virus become widespread, school closures “may be necessary”, even though they probably will not reduce the impact of the epidemic, according to the European Centre for Disease Control.

Such is the guidance on which Irish public health authorities are relying. The other issue is whether they actually have the powers to enforce restrictions on people’s movement if deemed necessary.

The short answer is that they do, though these powers are spread across a variety of public health and public order laws and regulations.

Covid-19 is now a notifiable disease, under regulations signed by Minister for Health Simon Harris last week. This means, for example, a doctor has the power to detain a probable case of infection where a person refuses to comply with infection prevention and control protocols.

“Much of this [power] stems from Garda powers of stop, question and search under the Offences against the State legislation, road traffic legislation and public order legislation, all of which confer very broad powers on gardaí,” says Prof Dermot Walsh of the University of Kent law school.

“The foot and mouth scare some years ago was a good example of gardaí regulating traffic movement to protect against the threat.”

However, Prof Walsh believes the threat posed by the coronavirus represents “a wholly novel situation for which there is no bespoke legislation in place”.

“Given that a Government-imposed lockdown on the movement of peoples in or out of a town (or prohibition on mass gatherings such as a concert or sports fixture) would constitute a serious encroachment on the constitutionally protected fundamental rights of the individual, I would expect the Government would seek to secure the enactment of emergency legislation giving it the powers to take such measures.”

Such legislation would benefit from the protections against constitutional review in the courts if adopted pursuant to a constitutionally declared emergency, he says.

The European Centre for Disease Control document says broad domestic travel restrictions may have a small positive impact in delaying an epidemic only if they are implemented at an early stage.

“Such restrictions may be effective in specific, isolated settings, but are unlikely to have significant impact on transmission in modern, mainly urban societies within the EU,” it says.

“They are expected to have significant economical, legal and ethical implications. Therefore, such restrictions may be considered only during the containment phase of epidemics of high severity.”

According to Dr Eoin O’Dell, a law professor at Trinity College Dublin, Ireland enjoys a greater freedom than many other countries in Europe in terms of imposing restrictions on movement between states because it is not a signatory to the Schengen Agreement, which removed border controls between many EU states.

However, with post-Brexit UK introducing measures that are at variance with the EU’s, there may be a disparity in approaches on either side of the Border in Ireland, and this could prove problematic.