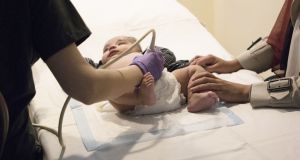 A coalition of patient groups warned Ireland was falling behind other countries when screening newborn babies for lesser known diseases. File photograph: iStock

The State’s newborn screening programme for rare diseases must be expanded to include at least 20 conditions to ensure early diagnosis and avoid delayed treatment later in life, a coalition of patient groups has said.

Speaking at the launch of the group’s “easy guide to rare diseases in Ireland” on Monday, Philip Watt, chair of the rare disease taskforce, warned that Ireland was falling far behind on the international stage when it comes to screening newborn babies for lesser known diseases.

“When newborn screening was introduced in Ireland in 1966 we were at the forefront of such screening worldwide,” he said. “Now we lag well behind.”

The group’s 10 priorities for action in the forthcoming programme for government also underlined the severe lack of genetic diagnostic and counselling professionals in Ireland, with numbers “among the worst in Europe”.

Ireland currently only has four consultant geneticists working in Ireland, far below the 15 professionals required under international standards, said the action plan. An additional 33 full-time genetic counsellors are also needed, it said.

Strategies are needed to target the needs of members of the Traveller community and migrant groups who suffer from other forms of rare diseases, said Mr Watt, adding that sickle cell diseases should be added to the newborn screening programme.

While 72 per cent of rare diseases are connected to genetics, it is important not to lose sight of other conditions such as lyme disease and rare cancers, he added.

A total of 3,021 people were awaiting a clinical medical genetics consultation in December 2019, up 14.5 per cent on the same time in previous years, with over a third of those on the list waiting more than a year.

Given the State’s low levels of genetic counselling services, some patients are receiving genetic diagnoses over the phone with no follow-up counselling, a practice described by Vicky McGrath, chief executive of Rare Diseases Ireland, as “inhumane”.

“A failure to provide adequate genetic services means a delay in diagnosis, a lack of appropriate treatment, and probable disease progression,” she said.

Commenting on the report’s findings, Minister for Health Simon Harris said he was committed to improving the newborn screening programme to make it “the very best in the world”. He said recent improvements for people with cystic fibrosis should provide a model on how to improve services for rare diseases.