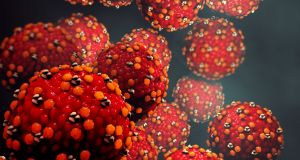 The first case of rubella in Ireland in more than a decade has been confirmed at a company on the northside of Cork city.

The first case of rubella in Ireland in more than a decade has been confirmed at a company on the northside of Cork city.

The Department of Public Health in the HSE South region issued a statement confirming that it was notified of a case of rubella, also known as German Measles, in recent weeks.

It refused to comment on the area where the rubella was detected due it having “ a duty to protect the privacy of the person affected”.

“However, we can confirm that all precautionary steps have been taken to alert anyone who may have been in contact with the individual.”

It said it had been in touch with GPs in the area who have been asked for support in “maintaining increased surveillance” and encouraging any “non-vaccinated people born after 1978 (less than 42 years of age) to get the MMR vaccine.

Dr Augustine Pereira, Director of Public Health, HSE South advised that the best protection from rubella is the MMR vaccine, which is provided free of charge.

The last confirmed acute rubella case in Ireland was in 2009. It is a contagious disease caused by the rubella virus.

Rubella is usually a mild acute viral disease accompanied by a low grade fever and a red rash usually starting on the face and progressing from head to foot. It can be fleeting but typically lasts about three days. The rash is fainter than the measles rash and may be more obvious after a hot shower or bath.

Individuals with rubella are most infectious from one week before to one week after the onset of the rash. The incubation period is 14-17 days, with most developing a rash 14-17 days after exposure.