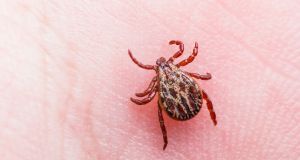 Lyme disease is transmitted by bites from infected ticks from deer and other wild animals. Photograph: iStock

Almost 100 people across the State have suffered from life-changing conditions as a result of Lyme disease over a six-year period, new figures show.

Lyme disease is transmitted by bites from infected ticks from deer and other wild animals.

Early signs may include a rash around the area of the bite, flu-like symptoms and neurological symptoms such as short-term memory loss. Permanent joint or nerve damage can arise from the disease if it is not promptly treated with antibiotics.

Since 2011, the HSE must report cases of Lyme neuroborreliosis, a severe form of the disease which affects the nervous system, to the Health Protection Surveillance Centre (HPSC).

Between the years 2012 and 2018, there were 96 cases of nervous system-affecting Lyme disease reported, according to HSE figures, which were released in response to a parliamentary question.

Dr Paul McKeown, specialist in public health medicine at the HPSC, said most cases of the disease were very mild. “In a small number of cases, however, the infection can be more severe, leading to serious nervous system, heart and joint disease,” he said.

He said the true number of cases of the disease was not known due to people being unaware that they had the condition.

“Cases of a more severe form of Lyme disease – neuroborreliosis – have to be reported to the HPSC by doctors and laboratories in Ireland. There are approximately 10-20 cases of neuroborreliosis notified in Ireland each year,” he said.

“As some people will not be aware that they are infected, or will not seek medical help when unwell, the true number of Lyme disease cases is not known. It is likely that there are at least 100-200 cases of the milder forms of Lyme disease in Ireland annually,” he added.

Dr McKeown said it was important people protected themselves against tick bites by wearing long trousers and tucking trouser legs into socks, and using tick repellents.

If bitten, a tick should be removed by holding the body of the insect with a tweezers and pulling lightly until it releases its hold on the skin.

Some medical experts believe the incidence of Lyme disease may be much higher than previously estimated, after a UK study showed the number of cases of the disease was three times higher than recorded.

Dr Jack Lambert, a consultant specialist in infectious disease at Dublin’s Mater hospital, believes recorded figures are “the tip of the iceberg”.

“My guesstimate for Ireland is that there are about 2,500 cases per year. I’m taking care of 20 people from Donegal who have the disease. How could there be only 200 or 300 cases each year if there are 20 people in Donegal alone who have it?” Dr Lambert asked. “I think we’re missing about 80 per cent of the cases. There is a lot more Lyme than Irish or UK governments are acknowledging.”

Mary Smyth, a volunteer with Tick Talk Ireland, a support group for people who suffer with the condition, said there was a lack of awareness and support for the illness.

“Many people often don’t know they have been bitten or take a tick out and it may be months or years [later] when they [are] getting all these symptoms and not able to get a clear picture of what is wrong with their health,” Ms Smyth said.

“This is not a simple disease and if not treated immediately at bite stage, you go on to have years of ill-health. Awareness is key not only for the general public but also the medical profession.”

The HPSC committee was finalising a report on the condition, a spokeswoman for the HSE added.

Speaking in the Dáil in June, Minister for Health Simon Harris said the infection was “well recognised” in Ireland.

“Specialists would be very familiar with how to manage such patients and, as a result, all physicians deal with Lyme disease, as they would with any other infectious disease for which they have responsibility,” Mr Harris said.

Coronavirus: Cross - Border travel to be monitored over weekend