One Year On: Seán Fenton turned to cannabis oil to avoid side effects of prescription medication 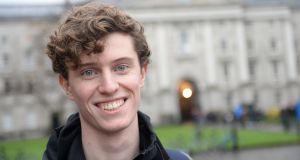 Sean Fenton, a first year student at Trinity College Dublin, believes cannabis oil helped him to reduce the level of strong anti-epileptic drugs which he said had the side effect of slowing his brain down. Photograph: Dara Mac Dónaill/The Irish Times 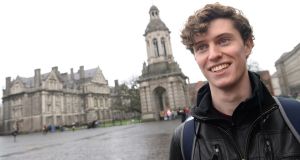 Sean Fenton: ‘I don’t allow myself to feel sorry for myself. I kind of force my mind to overlook that. When they say ‘Seán you have epilepsy you might not be able go to college,’ I say ‘shove it up your arse’.’ Photograph: Dara Mac Donaill/The Irish Times

Sean Fenton spoke to The Irish Times this time last year while in the middle of repeating his Leaving Cert.

On January 16th, 2017 he said he hoped cannabis oil would help him deal with the stresses of the exam s so he could get the necessary points for medicine.

Now, he speaks to us again as part of our One Year On series.

A student with epilepsy suffered a “life-threatening” seizure after he reduced his medication to help him study and took cannabis oil to try to control his condition.

Sean Fenton used cannabis oil during his Leaving Cert year to control his seizures while weaning himself off the anti-epileptic drugs which he says had the effect of slowing his brain down and making it hard to concentrate.

He doubled his points from 260 in 2016 to 520 points in 2017, but this was also aided by a stronger level of determination and increased focus.

However, in November 2017, three months into the Business Economics and Social Studies (BESS) course at Trinity College Dublin which he worked so hard to get into, he suffered what he says was a “very dangerous, life-threatening seizure” which saw him hospitalised for over a month.

“I don’t remember anything from it, it was called a Status Epilepticus. It is where a seizure goes on and on and it just doesn’t stop. It went for about four hours. One of the big, stereo-type ones that just don’t end,” Mr Fenton says.

He was rushed to hospital and put into an induced coma for eight days. He contracted pneumonia while there and missed his Christmas exams at TCD.

Could his reduced levels of medication have played a role in this big seizure?

“I was on a very low amount of drugs and that’s probably why it (the big seizure) did happen,” he says.

Mr Fenton says he told his then doctor he was gradually lowering the amount of medication he was taking and his doctor did not think it was a good idea.

Now he is back taking higher levels of medication and is finding his study at Trinity College Dublin increasingly difficult.

“Now they’ve upped all my drug levels because student life isn’t really . . . I wasn’t really able for it, all the alcohol, not that I was drinking much, but being out late and not minding my diet . . .it wasn’t really suitable for someone with active epilepsy.”

Consultant neurologist Dr Peter Widdess Walsh, who did not treat Mr Fenton, says if cannabidoil were introduced to a patient with epilepsy it would need to be a carefully monitored procedure.

“You would have to add the oil in first and monitor the results before you reduced any anti-epileptic medication,” Dr Walsh told The Irish Times.

“It would need to be carefully titrated and balanced so that breakthrough or bad seizures did not occur.

“It may allow for some of the [anti-epileptic] medication to be taken away but it would not replace it.”

Mr Fenton explains that the reason he reduced his medication was because it was slowing his brain down to an extent where he felt it was preferable to risk more seizures in return for being able to concentrate better.

“The seizures are caused by an over-active brain shooting messages back and forth and then it restarts like a computer when a computer overheats.

“The anti-epileptics make your brain slow down, which makes it very difficult to study,” he says.

Depression, skin problems and bone breakages are among the other possible side effects which Mr Fenton says are caused by the anti-epileptic medication.

“One of the best things about the oil is it just seems to work well. I have less seizures when I’m taking it and I don’t have to take as much medication when I’m on the oil,” he says.

Now that he has suffered such a large, dangerous seizure, it is no longer possible to keep his medication levels as low. However, he remains resolute.

“I don’t allow myself to feel sorry for myself. I kind of force my mind to overlook that. When they say ‘Sean you have epilepsy you might not be able go to college’, I say ‘shove it up your arse’.”

Mr Fenton travels to Amsterdam to buy high-grade CBD (cannabidoil), which is legal in Ireland but cannot be prescribed by a doctor because it is not considered to be a medicine.

It is different to THC (tetrahydrocannabinol), which is the main psychoactive substance in cannabis and requires a license from the Department of Health.

Just three people have been granted that licence in Ireland, most recently Cork couple Vera Twomey and Paul Barry for their eight-year-old daughter Ava Barry, who has a rare, genetic form of epilepsy called Dravet syndrome.

There is a Bill which proposes to legalise medicinal cannabis on the Dáil agenda, while Minister for Health Simon Harris said last November he hoped a rapid access programme for medicinal cannabis would be rolled out early in 2018.