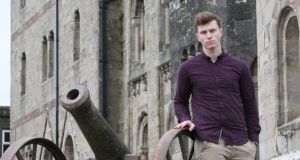 Student Seán Fenton: “I noticed a huge difference straight away. My head was clearer. I didn’t get as many seizures and those I did get went away more quickly.” Photograph: Liam Burke/Press

A 19-year-old Leaving Cert student from Cork says the use of medicinal cannabis to alleviate the symptoms of epilepsy has given him a realistic shot at studying medicine.

Seán Fenton hopes his use of cannabis oil will help him deal with the stresses of the exam so he can get the points necessary for the subject.

He says the Government needs to move quickly on the legalisation of medicinal cannabis so he and others whose symptoms may be alleviated can be prescribed the correct dosage.

A private member’s Bill to legalise medicinal cannabis is currently before the Oireachtas. The debate on the issue has been marked by testimony from users about the alleged beneficial effects of cannabis-containing substances for pain relief and other medical conditions.

Mr Fenton, a student at Glenstal Abbey in Co Limerick, says his life has been transformed since he began taking medicinal cannabis, initially in gel form and now as an oil.

“I noticed a huge difference straight away. My head was clearer. I didn’t get as many seizures and those I did get went away more quickly. In the months that followed I was able to lower the dose of my other medicines.”

Prior to taking the supplement, he was liable to suffer up to eight partial seizures a day. They had a devastating impact on his health, mental health and memory.

Since the age of 12, he has been on a range of anti-epileptic drugs, many of them highly addictive and with strong side-effects.

He says his brain refused to function without this daily “hit” of prescription drugs. If he was late in taking the drugs, his body would spasm uncontrollably in a grand mal seizure.

He says taking cannabinoids has reduced his symptoms and improved his concentration, allowing him to get on with his education.

Because of the high cost of the treatment – a bottle of cannabis oil costs about €300 – he has had to ration the amount he takes. “I reckon I’m taking about one-tenth of the dose I should be taking. If I were to use the proper dose the bottle would be gone within a week.”

He says he has no interest in the recreational use of marijuana. “I couldn’t care less if it were legalised generally, but I would like to see it made available for medical use. If they want to keep it away from people who don’t need it medically, I’m sure they will find ways.”

Last year, a three-year-old boy with a catastrophic form of epilepsy became the first person in Ireland to be legally allowed to use marijuana for medicinal purposes. The Department of Health granted the licence to Tristan Forde of Dunmanway, Co Cork, who suffers from Dravet Syndrome.

The Department says it is open to a doctor to apply for a licence for a cannabis-based product for a patient in their care.