Flu leads to death of 34 people in recent weeks 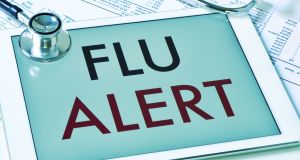 Influenza infection rates remain high countrywide with the B strain the most prevalent.

Confirmed flu hospitalisations slipped back by one-fifth to 400 during the week ending January 21st, compared to the previous seven days.

However, GP consultations for flu-like illnesses rose slightly to 103 per 100,000 population compared with 98 per 100,000 for the week ending January14th and 383 flu-positive specimens were reported last week.

There have been 1,454 recorded hospitalisations for flu cases so far this winter, with the majority comprising those aged over 65 and children under one.

There have been 34 flu-related deaths in recent weeks, with the average age of victims at 76.

Influenza infection rates remain high countrywide with the B strain the most prevalent. The Health Protection Surveillance Centre says the illness is expected to circulate for the next four weeks at least.

Meanwhile, the HSE has confirmed there were 390 patients waiting on trolleys at acute hospitals on Thursday morning, down from a two-week high of 520 recorded on Tuesday.

It was added that attendances across hospital emergency departments are up significantly over the last four weeks compared to the same period last year. The average monthly trolley count has also increased.