Group calls for decriminalisation of minor drugs possession by 2022 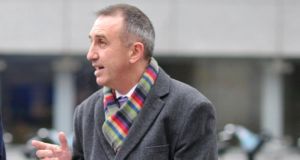 Ireland should aim to decriminalise the possession of small amounts of drugs within five years, a State-funded drugs policy group has recommended.

At the launch of the new 2018-2020 strategy for the Ana Liffey Drug Project, which also provides treatment services in the midwest and Dublin, the organisation’s chief executive Tony Duffin outlined its goal to see decriminalisation introduced by 2022.

“It’s an important statement of intent, this idea that we want to see decriminalisation of small amounts of drugs for personal use. I don’t know what that model looks like, that remains to be seen and it’s the decision of the Government,” he said.

The Government is curently in the process of formulating a new drugs strategy following a public consultation process last year.

Any decriminalisation regime is likely to resemble the one currently in force in Portugal, where people caught with small quantities of illicit substances are diverted to treatment facilities rather than being dealt with through the criminal justice system.

Ana Liffey was instrumental in pushing for legislation last year paving the way for supervised drug injecting clinics, and Mr Duffin said its new aim of seeing a decriminalisation regime introduced in a timely manner is based on the five years it took to legislate for injecting clinics.

A number of groups including Ana Liffey have tendered for the right to run the first clinic in Dublin following the passing of the Misuse of Drugs (Supervised Injecting Facilities) Act 2017 by the Oireachtas last May.

“Whoever wins that tender, we need to support and get behind them,” Mr Duffin remarked, adding:

“Nimbyism is a hurdle, there’s no doubt about it. Whoever wins the tender will have to engage proactively with the local community to reassure them.”

The strategy launch event in Dublin’s Mansion House on Friday morning was attended by Lord Mayor Mícheál Mac Donncha, former drugs minister Aodhán Ó Ríordáin and Dublin footballer Philly McMahon, who has been outspoken on the issue of addiction since his brother John died of an overdose in 2012.

“The way I would describe how I feel when I see someone who is becoming a recovering addict is it’s like winning all five All-Irelands at the one time, it’s an amazing thing.

Mr McMahon spoke about his recent experience of being invited to address a small parish in Tyrone after two local footballers were found in possession of drugs, and he warned of the dangers posed by other substances which are gaining in prevalence around the world.