Living with scoliosis: ‘My life is on hold waiting for surgery’ 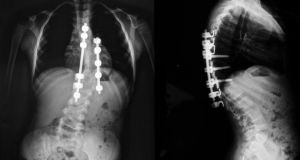 An X-ray taken of a person with scoliosis. File photograph: iStock

Aisling Corcoran has as much faith in political promises as she does in the health system – at this stage, very little.

Even when a pledge is made on the record in the national parliament by the Tánaiste, the second most senior politician in the land.

Mr Coveney was taking Leaders’ Questions at the time. After he read the letter from the hospital, where two scheduled surgeries for her had been cancelled, Mr Coveney met Ms Corcoran, whose case had been raised by Independents 4 Change TD Joan Collins.

“He was sorry that I was waiting that long and he would try and push it to get it done before the three months,” Aisling says.

“I was thankful but I wasn’t getting my hopes up because I had been promised so many times before . . . and it’s such a downfall then when you’re turned down.”

She could not believe the Tánaiste’s promise, because she had rung the hospital during the week and even the morning before the issue was raised in the Dáil.

“There was nothing said to me that it was three months. So I found it hard to believe when he said the three months.”

Joan Collins was not impressed either. The Dublin South-Central TD is among a number of Deputies who have consistently highlighted the waiting times for surgery for patients with scoliosis, a medical condition where the spine curves sideways.

Ms Collins in the Dáil described the letter as an “arse-covering exercise” because the hospital only responded when contacted by Minister for Health Simon Harris, who Ms Collins had alerted about the issue two weeks earlier.

One of the frustrations for Ms Corcoran herself was that the surgeon in charge had made no contact after the surgeries were cancelled and could not be reached despite numerous phone calls.

He had cancelled them for what she knows were understandable family reasons, but in his absence the system had failed her and there was no alternative but more delays, she says.

It was the same system that first diagnosed Aisling’s scoliosis problem when she was in national school. Health screening detected scoliosis. She was sent for hospital checks and this diagnosis was confirmed.

“My curve was only a slight amount then, but when it reaches 40 degrees or over that it’s getting out of control and you have to do something about it then.”

In the three months between diagnosis and surgery, the curvature of her spine went from 42 degrees to 62 degrees.

She was in first year in secondary school in 2000 when the rods were put in, in the children’s hospital in Crumlin, to help straighten her back.

In 2014 the rods got infected. Because she was an adult, it was Tallaght Hospital that dealt with her then. No antibiotics were working and the infection would enter her bloodstream if it was not dealt with, so the rods had to come out.

“But they were in 14 years and the skin had grown around the rods and everything else,” she remembers.

“They had a job to get them out of me because they were that embedded.”

But she knew she needed rods again, “otherwise I’d be kind of like bent over and I’d have different health issues in about 10 years”.

After the surgery she was fragile. “The recovery was tough enough but I kind of got through it.”

There followed years of appointments. “Your heart and lungs and organs could be affected by it. I was having numerous scans and X-rays.”

But then after a while there were no appointments.

One surgeon had explained the difficulties in scheduling surgery. “The doctor in charge has to have everything in place.”

That includes the nurses, operating theatre time, the follow-up care, the intensive care bed. The latter can be needed for days after the operation, but if there is an emergency before the scoliosis surgery, the operation is cancelled to facilitate the emergency.

“It’s his responsibility if everything isn’t in place and there’s a problem.”

Along with the beds and resources, there are the complexities of her case. “I had three different curves in my spine – at the top, middle and bottom, which was the most painful.”

The case “wouldn’t be as complex if you hadn’t had spinal surgery. My spine is fused in different areas.”

Two surgeons would be involved in her case. A surgery was cancelled in September and again in November four days before it was scheduled.

It was then that Aisling knew she had to go public. She had previously emailed Joan Collins after she heard her raising the issue in the Dáil.

A year or two ago she would not have done so. “I thought there were people waiting a lot longer than me.” But four years on she is still on a waiting list – “a priority waiting list”.

And her life has been a rollercoaster. She gets spasms of pain, which are particularly bad in her lower back. “I get tired easily or if I was walking a long distance now. I’m only 31; I should be able to do these things.

“I had kind of ups and downs with extreme pain where I had to have a lot of time off.

“When I’m at this age it is a good time for getting the rods back in, whereas down the line if I’m in my 50s or 40s it will be harder and even more complicated.”

Scoliosis “has taken up most of my life, missing out on different things. If I start doing courses then I need time off ’cos I’m sick and my back plays up. I am limited in what work I can get”, and such work has to be desk-bound.

She has had bits and pieces of work but she says “my life’s been on hold” waiting for this surgery.

There has been some improvement in paediatric scoliosis treatment following the development of an action plan by Mr Harris. Last year, 321 such surgeries took place, compared with 220 the previous year, a 46 per cent increase with a commitment to a four-month target for surgery.

But for adults, the prognosis is not so clear. And for the now weary Aisling Corcoran, she will just have to wait and see if Tallaght Hospital, the Minister for Health and the Tánaiste actually deliver on a promise.