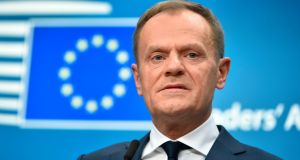 Ireland is willing to pay more into the European Union’s coffers after the United Kingdom quits, but it will not accept changes to corporation tax rules to plug the €11 billion-€15 billion gap in the union’s budget, Taoiseach Leo Varadkar has declared.

EU leaders discussed the next seven-year budget for the union, beginning in 2021, in Brussels on Friday, though the Netherlands, Austria, Denmark and Sweden – all currently net contributors – strongly oppose increases.

Ireland’s argues that EU policies “that work well, like the Common Agricultural Policy, like cohesion and structural funds” should be supported, said Mr Varadkar, but new initiatives should be funded by “new sources of money”.

However, the Taoiseach repeated Ireland’s opposition to an EU proposal for a common consolidated corporation tax base (CCCTB) throughout the EU, but said Ireland may be willing to increase its annual EU contribution.

“We believe that tax sovereignty is important, that national governments should set their own taxes and that money should be determined by national parliaments and spent on national budgets,” Mr Varadkar said.

“The Irish government is willing to contemplate an increase in our contributions over the next five years provided of course that other countries do likewise,” he went on.

Asked if Ireland could be forced to weaken its position on the CCCTB proposal in return for support on Brexit, Mr Varadkar told reporters: “No. Nobody’s tried that yet anyway. I don’t think they will either.”

Meanwhile, the latest British Brexit proposals – which would, if accepted, grant the UK the right to have “managed divergence” from EU regulations, but yet enjoy preferential access to EU markets – are simply not acceptable.

European Council president Donald Tusk said the proposals emerging are “based on pure illusion” and shows that the “cake philosophy” voiced by British foreign secretary Boris Johnson clearly lives on.

The British have proposed what has been called a “three-basket” approach which would allow them to opt in to some EU rules in some areas while reserving the right to set their own standards in others.

The emerging British approach, likely to be set out further by prime minister Theresa May in a speech next week, was agreed at a special meeting of Ms May’s Cabinet on Thursday.

Saying that he hoped to see “a lot more detail” from Ms May next week when she makes a key speech, Mr Varadkar said it “just isn’t possible” for London to cherrypick EU rules.

“Sooner or later that fundamental issue will have to be confronted and I think it would be better done sooner at this stage,” he said, while Irish sources earlier described London’s latest proposals as “a complete non-runner”.

Meanwhile, pro-European Conservative and Labour MPs have joined forces behind an amendment that would oblige Britain to stay in a customs union after Brexit.

The group, which includes former Conservative ministers Anna Soubry and Nicky Morgan, claimed they now have enough support to defeat the government, which is committed to leaving the customs union and the single market.

“There is no majority in the House of Commons for us not to participate in the customs union, that is absolutely clear,” said Labour MP Chuka Umunna, warning that the prime minister will lose a vote of MPs.

Following months of differing signals, Labour leader Jeremy Corbyn is expected on Monday to announce that Labour now supports remaining in a customs union after Brexit.

Until now, Labour’s position has been that Britain must leave the single market, but that customs union membership should remain as an option. A shift would allow Labour to whip its MPs behind the cross-party amendment.