Irish Water wants to reduce water staff by 1,000 and says it can save €70 million 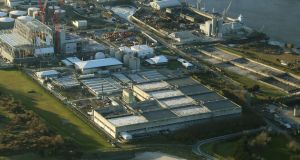 The Ringsend waste water treatment plant, which is being upgraded.

Irish Water says 40 per cent of the River Liffey’s water is being extracted to supply water to Dublin and that the utility would be in “serious trouble” if there was a drought or prolonged dry period in the capital.

Jerry Grant, Irish Water’s managing director, told the Oireachtas Joint Committee on Housing that leaks in Dublin accounted for 37 per cent of water produced, which was a “massive challenge” for the utility to address.

Outlining some of the challenges facing Irish Water, Mr Grant said it was replacing 70km of mains to improve water pressure management.

However, he said the only way to deal with the supply issue in the long-term was to build a new scheme to service Dublin.

“There is no way out of it but to build a new scheme and that is from the Shannon [with extraction from the Parteen Basin],” he said.

Mr Grant said Irish Water’s target was to submit its plans for such a scheme early next year, with work starting on the project in 2021 and delivery to Dublin and the midlands by 2025.

In terms of leaks, he told the committee that on average each house with a leak was using the same quantity of water as 35 houses.

Committee member Mick Barry TD (Solidarity) queried the “excessive use charge” to be introduced by Irish Water over the next few years. He claimed it was “the first step” in trying to introduce water charges by the back door.

“If there are attempts that will be resisted by parties like my own, but also by communities through the country,” he said.

The committee heard that Irish Water and its parent company Ervia want to accelerate its planned move to becoming a single public-service utility by 2021, four years sooner than expected.

At present, Irish Water has service-level agreements (SLAs) with the 34 local authorities, whose water services staff carry out operational work on behalf of the utility, which has about 300 staff.

Irish Water said it could save €70 million per annum in operational costs and reduce the number of staff working in water services by 1,000 if it moves to becoming a single public-service utility by 2021.

When the company was being set up in 2013, it was proposed that control of all operations and staff would be transferred from local authorities over a period of 12 years.

Senior management of Ervia and Irish Water told the committee the current arrangement would mean its water plans would not meet service targets and also pointed to inconsistencies from council to council when it came to customer outcomes, work practices and handling of leak reports.

Mike Quinn, chief executive of Ervia, said the earlier transfer of services to Irish Water would allow operations and processes to be standardised across the State.

“Ervia examined the options to meet its regulatory and business plan targets and concluded that the public water system would benefit from greater integration of operations into a single utility,” he told the committee.

Committee members sought assurances that local authority staff would not lose out. Mr Quinn and Mr Grant said there would be no compulsory redundancies.

Mr Grant also said the company would be “absolutely competitive and consistent with public-service salaries” when taking on new hires.

He was responding to a question from Mr Barry, who said new staff should be on the same terms and conditions as existing Ervia staff.

He said the long-term aim was to reduce that to about 3,300, through a reduction of 850 staff in operations and a further 150 on the capital services side.

Mr Ó Broin said the utility’s plans would not mean a €70 million net saving to the State, as some of the savings and efficiencies for Irish Water would have to be borne elsewhere.