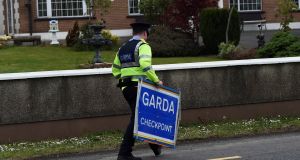 A Garda removes a checkpoint sign at the border between counties Armagh and Louth, during a visit by EU chief negotiator for Brexit Michel Barnier last May. Photograph: Reuters/Clodagh Kilcoyne

Irish companies dependent on the UK market will face difficulties when Britain leaves the EU, Taoiseach Leo Varadkar has said.

There was no point in denying that, he told the Dáil on Wednesday.

“No matter who sits in this office, or from which side of the House one looks at it, if there is a significant change in the trading relationship between Britain and Ireland, companies that depend on the UK market for exports will face difficulties,’’ he said.

Mr Varadkar said the Government needed to help those companies to prepare for Brexit by diversifying markets and increasing domestic markets and elsewhere.

He said when there was a better idea of what Brexit would really mean, and what it would look like in terms of the next trading relationship, the Government would be able to provide loans, and perhaps even State aid, to companies to allow them to change so they could appeal to new markets.

Mr Varadkar said the Government had published several action plans, all of which took Brexit into consideration.

The 2018 action plan for jobs specifically included actions to prepare businesses and enterprise for Brexit.

It had been approved by the Cabinet on Tuesday and would be published in the coming weeks, he added.

The Taoiseach was replying to Fianna Fáil leader Micheál Martin, who said the Dutch government had identified the number of extra customs officials it would require, depending on different Brexit outcomes.

While a lot of documents were being issued by the Irish Government, there was nearly no new information about sectoral actions, Mr Martin added.

Sinn Féin finance spokesman Pearse Doherty said some hardline Brexiteers in the UK seemed to be living on a very different planet to other people.

Labour MP Kate Hoey had said the Belfast Agreement was unsustainable, while Conservative MP Owen Paterson, once described by Gerry Adams TD as a “complete tube’’, had said the agreement had outlived its use, he added.

“These remarks do little to allay the real fears and concerns of people across the island, and in the north in particular, about the Tory-Brexit agenda,’’ Mr Doherty added.

“Not alone are we facing the negative impacts on our economy, our rights, and on every aspect of society, but now some of them also want to cast aside the Good Friday Agreement.’’

He said Sinn Féin president Mary Lou McDonald and vice-president Michelle O’Neill were in London and would make it clear to British prime minister Theresa May that the attitudes being bandied about were “ridiculous and unacceptable’’.

“We know that the Good Friday Agreement and its institutions are what is best for all our people, our economy, public services and building reconciliation,’’ Mr Doherty added.

“Given the collapse of last week’s talks, our view is that the best way forward is to embrace the Good Friday Agreement and re-establish the executive on the basis of equality and respect, as intended.’’