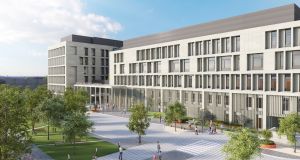 Illustration of the new National Maternity Hospital, plans for which have been thrown into jeopardy on Friday evening.

The proposed move of the National Maternity Hospital to a religious-owned site at St Vincent’s Hospital is in jeopardy after the board of St Vincent’s announced it plans to review the status of the project.

The board said the decision was prompted by “controversy and misinformation that has arisen in recent times” and the views expressed by Minister for Health Simon Harris and other TDs.

The Irish Times understands St Vincent’s was extremely reluctant to agree to the relocation of the National Maternity Hospital to its campus in the first place, and was subjected to considerable pressure from Government and the HSE to accept the plan.

When St Vincent’s agreed to accept the move from Holles Street, it sought to integrate the new hospital into its structures, but compromised to accept a separate legal entity and to preserve the mastership system of the National Maternity Hospital, which sees the hospital led by a doctor.

“Vincent’s didn’t want this at all in the first place,” according to a source familiar with the discussions between the two hospitals, and with the Government. “They had to be persuaded to take it. Now they’re being portrayed as some sort of Catholic ginger group.”

Other sources with direct knowledge of the issue confirmed St Vincent’s reluctance to accept the hospital.

St Vincent’s is also thought to be irritated by the suggestion from Mr Harris in a statement on Thursday that HSE chief executive Tony O’Brien would ensure that St Vincent’s does not seek to impose a religious ethos on the new maternity hospital.

Mr O’Brien has repeatedly clashed with St Vincent’s over executive remuneration at the hospital, leading to the departure of chief executive Nicky Jermyn in 2014. However, he later returned in a different role at the hospital group.

The shock announcement puts pressure on Mr Harris, who this week said “legitimate questions” had been raised about an agreement he personally announced less than six months ago.

The deal reached between the maternity hospital and St Vincent’s last November has been the subject of intense criticism this week after it emerged the new facility would be built on land owned by the Sisters of Charity. Under the deal, the hospital is to be run by a subsidiary company of St Vincent’s Healthcare Group, which is owned by the order.

Responding to the criticism, Mr Harris said on Thursday he was instructing the HSE to seek protections against “religious interference” during detailed contractual arrangements in advance of construction.

St Vincent’s viewed this intervention as an attempt by the Minister to “unpick” an agreement he heartily approved of at the time it was announced, according to an informed source.

“They won’t take being constantly blackguarded. The Government should be defending an agreement they supported last November.”

Last night, Mr Harris insisted the independence of the new hospital as provided for in the agreement would also be “copperfastened” by new legal arrangements.

He expressed confidence the protections he had identified against religious interference would be met as the project proceeds to development.