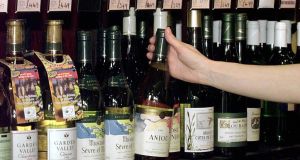 According to the Health Research Board, Ireland has the fourth-highest level of alcohol consumption in the OECD region. Photograph: Rui Vieira/PA

The United Nations Development Programme (UNDP) is to hold up Ireland’s alcohol consumption policies as an exemplar for other developed countries.

By 2020, Ireland aims to reduce pure alcohol intake from about 11 litres per person to 9.1 litres, the average rate in the Organisation for Economic Co-operation and Development (OECD) members.

It is also attempting to pass the Public Health (Alcohol) Bill, elements of which have run into difficulties with the European Commission over competition law.

The legislation covers the introduction of minimum unit pricing; structural segregation of alcohol from other products in supermarkets and retail outlets; detailed labelling requirements including health warnings, calorie and alcohol content; and restrictions on advertising and promotions.

Dudley Tarlton, a policy specialist at the UNDP, said there was evidence Ireland’s ambitions in the area of alcohol policy would bring economic benefits to the country.

He is due to address the “Opening Ireland’s Eyes: Alcohol justice and the Sustainable Development Goals” conference, organised by the Alcohol Forum organisation, in Dublin on Friday.

“Just setting the target is a big step forward and in most countries we want to make sure they have a strategy,” he said. “We work almost exclusively in developing countries but we want to encourage everyone to have stronger alcohol policies and we have seen a commitment from Ireland.”

Part of the UNDP’s work, in conjunction with the World Health Organisation, is to examine health policy in terms of cost-benefit analysis.

In areas such as alcohol policy, this can include examining raising taxes, advertising restrictions, support for individuals and investment in safety, including drink driving awareness, and drawing conclusions on their economic value over a period of time.

Mr Tarlton is also due to meet Minister of State for Health Promotion Catherine Byrne on Friday to discuss the direction of Irish policy in the area of alcohol.

According to the Health Research Board, Ireland has the fourth-highest level of alcohol consumption in the OECD region.

Paula Leonard of the Alcohol Forum said consumption rates had trebled since the 1960s and while Irish policy was moving in the right direction, it required support.

“We know that legislation is only one measure and that you need community action,” she said. “There has been no new resources for the regional and local drugs and alcohol task forces around developing and discussing initiatives to reduce alcohol harm around the country.”