Department says it is considering three medicines for approval 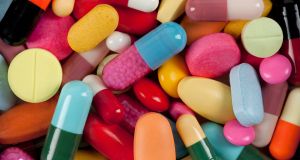 Thousands of patients are being deprived of access to new medicines because the Health Service Executive has no money left to fund them this year.

Under new rules introduced in 2013, in circumstances where the HSE says it cannot fund a new drug, the Department can bring a memorandum to Government requesting additional funding for it.

To date, however, only one memo has been brought forward, for the cystic fibrosis drugs Orkambi and Kalydeco. Earlier this year, the Government agreed to fund the two drugs for over 900 cystic fibrosis patients in a deal that will cost over €650 million over 10 years.

The Irish Pharmaceutical Healthcare Association says it is “entirely unacceptable” the HSE is routinely sending medicines it has agreed to, and wants to fund, to the Department for approval because no funding is available.

Chief executive Oliver O’Connor suggested one reason the HSE had no funding for new treatments was because of the size of the Orkambi/Kalydeco deal. The manufacturer of the two CF drugs is not a member of IPHA.

The Department says it is considering three other medicines for approval. Entresto, a heart failure drug made by Novartis, has been approved by the National Centre for Pharmacoeconomics on cost effectiveness grounds and by the HSE drugs group but is still awaiting a decision, over 500 days after a pricing application was made.

The drugs reduces cardiovascular mortality by 21 per cent and hospitalizations by 20 per cent compared to existing treatments, according to Prof Vincent Maher, consultant cardiologist at Tallaght Hospital.

Another drug awaiting approval, Erivedge, is used to treat adults with a form of skin cancer called advanced basal cell carcinoma. Manufactured by Roche, it has been shown to significantly reduce tumour size in up to half of patients.

The third drug, Brintellix, is an antidepressant manufactured by Lundbeck.

The HSE said that in spite of the 2015 price agreement with IPHA, spending on medicines continues to grow. The cost of high-tech drugs has increased 5 per cent this year, for example.

The actual price after negotiations with drug manufacturers can often be significantly lower than the price first demanded, a spokeswoman pointed out.

“While the HSE strives to reach a decision regarding drug approval in as timely a manner as possible, because of the significant monies involved, there is an onus to ensure that the best price is achieved as these commitments often feature multi-million euro investments on an ongoing basis.

“Despite the appearance of it being a protracted process this robust approach has proved its effectiveness in negotiations in the recent past with successful savings achieved.

“The unacceptably high price structure for drugs dispensed in Ireland has been covered on many occasions in the media and highlighted as an unfair burden on patients.”