Hospitals ‘too reliant’ on overseas doctors as graduates quit Ireland 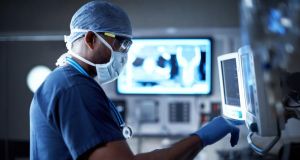 “Stopgap measure”: Ireland’s reliance on overseas doctors will prove ineffective and unsustainable, according to the Royal College of Surgeons in Ireland. Photograph: E+/Getty

Ireland is increasingly reliant on foreign-trained doctors because of the growing demand for medical staff and high rates of emigration by Irish doctors, according to a new report.

Our reliance on overseas doctors is a “stopgap measure” that will ultimately prove ineffective and unsustainable as they move on to work in other countries, according to researchers at the Royal College of Surgeons in Ireland. It also fails to comply with the Republic’s responsibility not to recruit from poorer countries that can ill afford to lose their doctors.

The report refers to an initial “brain gain” for Ireland being followed by “brain waste”, as foreign-trained doctors see their careers in Irish hospitals slow down or stall, and then a “brain drain”, as they leave for other wealthy countries.

The rate at which doctors from outside Ireland and the rest of the EU are registering with the Medical Council is more than 16 times that of the increase in registrations by Irish graduates, an analysis by the RCSI Health Workforce Research Group shows.

The proportion of Irish graduates on the register continues to fall, from 65 per cent in 2012 to 62 per cent in 2015, in spite of a doubling in the output of medical graduates, from 370 to 725, over the decade up to 2015. The report says increased domestic supply of doctors is not sufficient to keep Irish hospitals staffed.

One in five international medical graduates in Ireland is from Pakistan. Although this proportion has remained static, the number of Pakistani doctors here has increased almost fourfold, from 375 in 2000 to 1,481 in 2015.

Africa accounts for 28 per cent of international medical graduates in the Republic, with one country, Sudan, representing 10 per cent of the total.

Another notable trend is the rapid growth of doctors trained in central and eastern Europe, especially in Romania and Hungary. Most of these are not from the countries themselves but are from the developing world or even Ireland.

Two-thirds of doctors leaving the Medical Council register are Irish-trained; the rest were trained in other countries. While exit rates were highest for doctors at retirement age, rising exit rates by 25- to 34-year-olds indicates increasing emigration among young doctors.

Prof Ruairí Brugha, head of public-health medicine at the RCSI, said the scale of the growing medical-workforce crisis, and the need for radical response, needed to be recognised at high levels.

“Irish hospitals are employing increasing numbers of foreign-trained doctors into posts that don’t provide these doctors with an adequate level of supervised training. This is not good for patients or for these doctors’ careers,” he said. “The high turnover of such doctors confirms earlier research which shows that international recruitment is not an effective strategy.”