Health insurance set to jump €600 per person over 10 years 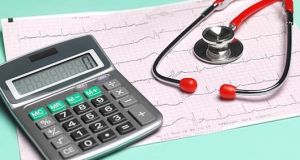 The conference heard by 2027 the average consumer will be paying €11,000 a year between taxes and insurance premiums for public and private health services. Photograph: Getty Images

Average health insurance premiums are set to jump by at least €600 per person over the next decade due to increased claims from an ageing population, the head of one of the State’s largest insurers has warned.

The current average premium for an adult is under €1,200, and premiums have started rising again after a short period of standing still.

New ways will have to be found to save costs if rising premiums are to be avoided, Irish Life Health managing director Jim Dowdall told a conference in Dublin.

He said this could be done by avoiding duplication of expensive medical technologies in private hospitals, providing funding based on outcomes and performance, and ending “double-charging” of private patients using public facilities.

By 2027, the average consumer will be paying €11,000 a year between taxes and insurance premiums for public and private health services, according to Mr Dowdall.

“Our claims costs as a result of an ageing population are going to go up and up unless we change the system,” Mr Dowdall told the Private Hospitals Association conference. “All of these costs get passed on to the private health insurance customer.”

The HSE earns €650 million a year from private patients using public hospitals, but insurers have claimed patients with private cover are being treated as revenue-raising private patients even when they are availing only of public facilities.

Mr Dowdall claimed this practice accounted for €200 million of the sums raised each year. “Health insurance companies have no problem for paying for additional services but this is short-sighted opportunism and it is not sustainable.”

The €200 million diverted in this way could be used to perform 10,000 endoscopies, or to clear every person on orthopaedic waiting lists, he said.

VHI chief executive John O’Dwyer told the conference private health insurance was facing an “affordability spiral” as customers aged and claims rose. “As a country Ireland is ageing on speed. If people cannot afford health insurance, the entire health system will be challenged.”

Former Royal College of Surgeons in Ireland president Prof Patrick Broe said that of 28 hospitals providing acute care, nine were improperly staffed and equipped. While no one was suggest closing these hospitals, it would greatly improve waiting lists if they were designated for treating elective work only.

Minister for Health Simon Harris told the conference legislation giving the State’s health watchdog the power to investigate incidents in private healthcare would be brought to Cabinet in the autumn.

The legislation will place private hospitals, along with other private operators such as cosmetic surgery clinics, under the remit of the Health Information and Quality Authority (Hiqa) for the first time.

Mr Harris said a key objective of the new legislation would be to improve patient safety by ensuring healthcare providers do not operate below core standards that were applied in a consistent and systematic way.

Mr Harris said work on the general scheme of a Bill was well advanced, and would be brought to Government in early autumn for formal drafting.

Currently, Hiqa has powers to investigate issues in public hospitals, though it cannot impose sanctions or investigate individual complaints by patients. It has greater powers to maintain standards at residential care homes.