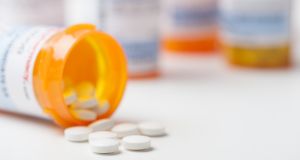 Spending on high-tech drugs has increased from €400 million in 2012 to €700 million this year, the committee heard. Photograph: Getty Images

The Health Service Executive saved €28 million over five years on a single drug by delaying a decision on its approval, an Oireachtas committee has heard.

This occurred when the price for the breast cancer therapy “collapsed” after another country became the first to approve it for reimbursement, HSE chief pharmacist Shaun Flanagan told the committee.

The manufacturer of palbociclib had first sought a price of €3,800 per pack when seeking approval for the drug in Ireland in 2016, giving a total cost to the Exchequer of €66 million a year, Mr Flanagan said.

Negotiations with the HSE continued for a year, but when a decision on approval was made in another country, the price sought dropped to €2,190, leading to the saving.

“If we go early [with a decision], we pay more for fewer drugs. The challenge for a small country is that if you’re first, you pay the most, and the longer you’re in the line the better the offer.”

Spending on high-tech drugs has increased from €400 million in 2012 to €700 million this year, the committee heard.

Mr Flanagan cited the example to illustrate the challenges faced by the HSE in negotiating the price of expensive, groundbreaking new drugs. “We’re slower than other countries,” he acknowledged. “It’s down to the challenges over resources and in matching them to the demands we have.”

He was responding to questions from TDs about delays in approving new orphan drugs, which are used to treat rare diseases.

About 300,000 in Ireland have a rare disease but because there are an estimated 6,000 to 8,000 such diseases, the numbers with each condition can be quite small. And while new therapies promises to revolutionise the treatment of rare diseases, their cost can be astronomical due to the small market involved and the cost of developing the drugs.

In addition, orphan drugs struggle to get approval on cost-efficiency grounds due to their price and the lack of comparator drugs.

Vicky McGrath, interim chief executive of Rare Diseases Ireland, said Ireland needs to take an innovative approach to reimbursing the cost of medicines that deals with rare diseases as well as common ones.

For many rare diseases, orphan drugs were “the only game in town” but should only be provided to patients who can benefit from them.

New gene therapies currently being developed promised to greatly improve the prospects for many patients with rare diseases, but they will be expensive, she said. However, a value had to be placed on a patient being able to walk unaided instead of being confined to a wheelchair, or a child having its sight restored.

Ms McGrath called for a “transparent” reimbursement system, the development of genetic services and the inclusion of patients as partners in decisionmaking.

Finian Judge of the Department of Health said Minister for Health Simon Harris was satisfied a robust process was in place for considering drugs, decisions were made on an objective and scientific basis and there was no legal barrier to the reimbursement of orphan drugs.

The department was preparing to review the governance arrangements applying to the HSE process for approving drugs, he said.