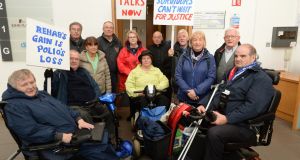 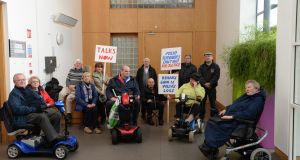 A group of polio survivors are occupying the Park West offices of the Rehab disability organisation in a row over financial support.

The Justice for Polio Survivors group claims Rehab has contributed relatively little to polio supports compared with what had been raised through fundraising over the years and from its merger with the Polio Fellowship of Ireland in the 1980s.

Through this merger, Rehab received assets and income worth about €8 million in today’s terms, the group claims. “These assets were bought with funds raised by polio survivors, their families and friends. Only 7 per cent of this money has been spent on people who had polio.”

The group of about 20 protesters occupied the reception area of the offices at about 2pm today and have vowed to remain indefinitely.

“The campaign refuses to give up their campaign until the considerable assets Rehab acquired are used to support this ageing group of people with disabilities,” a spokeswoman said.

“The Rehab Group is ignoring its obligations by holding on to the assets they took from the polio community, while providing no services, supports or funding to those affected by polio as babies or young children.”

Rehab has said it provided grants totalling €583,000 to the polio group between 2000 and 2015 with money from the Charitable Lottery Fund. However, when the fund ended, it was no longer able to provide funding.

“The cessation of the fund had a significant impact on Rehab’s funding stream and as financial sustainability is a key pillar of our long-term strategic plan, we could no longer continue to make these donations.”

A spokeswoman said last month that believed it would be inappropriate to use its funding to grant aid to another charity.

Polio, a crippling and potentially fatal disease, was once common in Ireland but has all but disappeared since the introduction of a vaccine in the 1950s. It is estimated there are 7,000 polio survivors living with the disease in Ireland.