Face mask compliance: a patchy exercise on buses and trains

‘Once a passenger has prepaid for their ticket, it is hard to refuse them on the bus’ 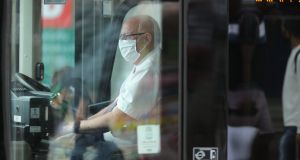 Aa Bus Éireann driver said people may wear masks to get onboard, but it did not mean that they would wear them throughout the journey. Photograph Nick Bradshaw/The Irish Times 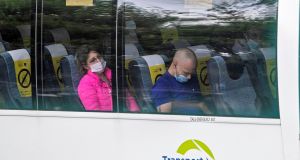 All nine passengers onboard the 5:30 service to Dublin had worn masks, while there just one passenger on the 6:25 service who did not. Photograph: Colin Keegan, Collins Dublin

Jane Henry, complete with face mask, was one of 186 passengers who alighted onto the platform at Galway’s Ceannt railway station on Monday morning from the 8.35am Limerick train.

“Seventy five per cent of people wore masks, and there was obvious social distancing on board,” the 20-year-old said, “It’s more important to be safe than offend someone, if someone wasn’t wearing a mask, I would just move away.”

Normally, the 8.35am from Limerick carries 350 passengers by the time it arrives in Ceannt, though numbers are down because of the impact of Covid-19 on holidaymakers and more people working from home.

Brazilian student Leficia Sousa made the same journey: 90 per cent of people in her carriage wore masks, though she said she felt uncomfortable with groups gathering at the doors of the train when approaching stops.

“Because a lot of seats were blocked off for social distancing, more people were standing, there was one man standing behind me not wearing a mask,” Sousa told The Irish Times after she arrived.

The morning had begun well for Iarnród Éireann staff trying to ensure compliance with the new rules. All nine passengers onboard the 5:30 service to Dublin had worn masks, while there just one passenger on the 6:25 service who did not.

One hundred and fifty passengers left Ceannt for Dublin on the 11am service to Dublin. One passenger, who was a non-national, was not aware of the legislation and was provided with a mask.

However, compliance is a patchy exercise: “A lot of people don’t wear the mask when standing on the platform or in the station, but put it on when boarding, or when asked,” said an Iarnród Éireann official.

Daniel Shortt and Stephen Jordans, both 22 and from Skerries, Co Dublin, cycled 250km from Dublin to Galway and travelled back to Dublin on the 2:35pm train to Heuston, and had masks in their pockets. They would “put them on when stepping onto the train”, they said.

Seventy-two-year-old Philip Clancy from Spiddal, Co Galway, who usually travelled into Galway twice a week before Covid-19 changed everyone’s lives, made his first bus journey on Monday since Easter.

Clancy said he felt more comfortable travelling when people were wearing masks and social distancing: “Nearly everyone was wearing a mask, but if someone wasn’t wearing it, I would tell them to put it on.”

However, a Bus Éireann driver said people may wear masks to get onboard, but it did not mean that they would wear them throughout the journey. He believes 60 per cent take them off.

Under the revised Covid-19 restrictions, Bus Éireann can carry up to 21 passengers on its largest 52-seater bus. The 8:30am bus from Ballina, Co Mayo to Galway arrived with just 18 passengers onboard.

“Once a passenger has prepaid for their ticket, it is hard to refuse them on the bus, and some people get annoyed when asked to wear [a face mask],” said one driver, clearly less than comfortable with being expected to police the new rules.

Under social distancing guidelines, window seating only is now the norm on Bus Éireann services, while two rows of seats behind the driver must be free at all times.

Twenty-two-year-old student Enda Mulchrone had travelled by bus from Castlebar, Co Mayo to meet friends. Most passengers had worn a mask, though some did so incorrectly and there was no sign of hand sanitisers on board.

“In eastern countries wearing a mask is normal, it should be normalised rather than being viewed as a hindrance,” said Mulchrone, who approved of the social distancing rules on board “100 per cent, it feels more comfortable”.

Private cleaning company Noonan Cleaning has the job of cleaning and disinfecting every Bus Éireann bus when it reaches its final destination in Ceannt station, while Iarnród Éireann has its own cleaners for each train.

Magda Cichocka, who works as a barista behind a Perspex screen at Mocha Beans at Ceannt station, has seen more and more passengers arriving over the past fortnight, mostly holidaymakers.

“Ninety five per cent of people wear a mask when ordering,” says Cichocka, “A lot of people ask me for help with the ticket machines, which I would prefer not to because I don’t know how often they are cleaned.”