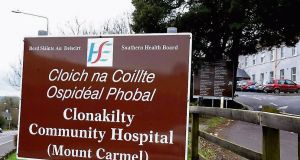 A concerned relative contacted the HSE claiming that infection controls were not being followed at Clonakilty Community Hospital.

The State’s health service watchdog twice queried the HSE’s decision to allow coronavirus-infected residents share rooms with non-Covid residents at a west Cork care facility during an outbreak of the disease.

The regulator, the Health and Information Quality Authority (Hiqa), twice wrote to the HSE over how residents were being accommodated at Clonakilty Community Hospital after receiving information from a concerned relative claiming that infection controls were not being followed.

The care facility was among the worst affected in the country during the pandemic, recording 10 Covid-19 deaths in an outbreak that began on April 5th.

Letters detailing the concerns were released to The Irish Times by Hiqa under the Freedom of Information Act. Hiqa redacted information identifying individuals and homes from the records but this newspaper has independently established their identities.

“This puts vulnerable residents at serious risk of contracting the virus,” she said.

In the absence of a detailed response, she wrote again to the HSE on April 27th escalating her same concerns to the HSE’s national director of community operations, David Walsh.

Mr Reaney responded on May 1st saying in a three-page letter: “You will note the only locations where residents with no symptoms are in the same room as residents who are positive or suspected positive is in the [unidentified unit of the hospital].”

The residents in this unit “have dementia and it has not been possible to appropriately accommodate them elsewhere while maintaining infection control”, he continued.

The HSE’s Cork Kerry Community Healthcare division said in reply to queries that the care facility followed “at all times” the expert advice and guidance of a consultant geriatrician, a public health consultant and the HSE’s infection prevention and control team during the outbreak.

“At all times, every possible precaution was taken to keep residents and staff safe,” it said.