Minister for Finance Paschal Donohoe announces a €6 per tonne increase in carbon tax. That increase falls short of the €15 per tonne recommended by the Climate Change Advisory Committee and the €20 called for by the Greens. Video: Oireachtas TV 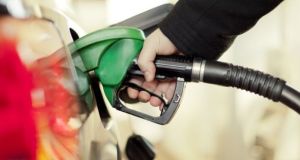 AA Ireland was highly criticial of the increase in carbon tax

There was a cautious welcome from business groups to Budget 2020 with a hike in commercial stamp duty going down badly along with an increase in the carbon tax.

AA Ireland said the rise in carbon tax would do little to reduce Ireland’s overreliance on the private car, criticising the move as little more than a Government “cash-grab dressed up as a green initiative”.

“Government have cynically taken advantage of the climate crisis to justify a tax increase, instead of outlining measures which would actually lead to reductions in our carbon emissions,” said director of consumer affairs Conor Faughnan.

Ibec said Budget 2020 would help businesses deal with the uncertainty of Brexit and praised moves to increase supports for those most likely to be impacted by Britain’s exit from the European Union.

It also welcomed increases in spending on public infrastructure and additional tax supports for SMEs.

“The Government has in our view struck the right balance by focusing available resources on those measures which can help insulate the economy from external shocks by investing in critical infrastructure, preparing for Brexit, and improving supports for SMEs,” said Ibec chief executive Danny McCoy.

Dublin Chamber described Budget 2020 as “a modest step in the right direction”, but warned that more robust action will be needed to prepare Irish enterprises ahead of a possible no-deal Brexit.

It welcomed improvements to the Employment and Investment Incentive Scheme (EIIS), but said that, without changes to the Capital Gains Tax regime, investment levels would remain lower than they should be.

The Small Firms Association criticised the budget for not being ambitious enough.

“Small firms are the backbone of the Irish economy, supporting them helps create and sustain jobs throughout the country. It is disappointing that Budget 2020 did not recognise their importance by introducing ambitious measures to support entrepreneurship,” said director Swen Spollen-Behrens.

Accounting body CPA Ireland said it was “the SME and entrepreneurship budget which Ireland has required for the last number of years”.

“With the nightmare of a no-deal Brexit now just days away it is welcome that the budget is focused on helping businesses withstand the pressures this will bring,” said president Gearóid O’Driscoll.

The Institute of Directors said the Government had “delivered the conservative budget that was required”.

The American Chamber of Commerce Ireland welcomed the restatement by Government the State’s commitment to the 12.5 per cent corporation tax rate.

Technology Ireland, an Ibec-affiliated organisation, said the decision not to improve CGT for entrepreneurs was disappointing. It also said that while the KEEP changes were welcome, the scheme remained over restrictive.

Elsewhere, the British Irish Chamber of Commerce welcomed the establishment of a Brexit contingency fund. It said the approach taken to a potential no deal “is a prudent one that will best help protect businesses and trade in the uncertain days and weeks ahead”.

The Irish Exporters Association also welcomed the additional financial supports for businesses as well as the increase in the R&D tax credits for smaller companies.

The decision to raise stamp duty for commercial property from 6 per cent to 7.5 per cent was widely criticised with CBRE saying it would impact negatively on prices and deter international investors.

“This increase in stamp duty will certainly have a bearing on investors’ decision-making, not least the price they will bid and pay for commercial real estate assets from this point forward,” said executive director Marie Hunt.

Savills meanwhile described the move as “unhelpful” in promoting the Republic as a stable and predictable place to do business. It also noted that this the second time in three budgets that stamp duty has increased.

Staying with property, the Construction Industry Federation, which also criticised the rise in stamp duty, welcomed the Help to Buy scheme extension but warned it would not address the affordability gap faced by many families.

Still smarting from a rise in VAT from 9 per cent to 13.5 per cent in last year’s budget, representatives from the tourism sector were angry at a failure to reverse it given the threat that Brexit poses to the industry.

The Irish Hotels Federation called Budget 2020 “a missed opportunity” to rebalance the tax take from tourism.

“A rate of 9 per cent VAT is the appropriate level for Ireland and would put us mid-range in a European context. This is what the Government should be looking at to ensure long-term sustainable growth of our industry,” said IHF president Michael Lennon.

The Restaurants Association of Ireland was stronger in its criticism with chief executive Adrian Cummins saying Minister Shane Ross had “failed the tourism industry” by failure to bolster support for the sector.

1 Chris Johns: Boohoo exposed on pay and conditions in digital economy
2 In this strangest of recessions, what happens next for Ireland?
3 Should I switch bank now with Ulster Bank at risk of closing?
4 FBD changes wording of business insurance policies amid fight over virus payouts
5 Hotel bookings collapse in wake of additional Covid restrictions
6 Bank of Ireland sees about 2,000 staff apply for voluntary redundancy
7 Why working in an office beats living at work
8 Qatar Airways got €1.7bn government lifeline after losses widened
9 ‘Working remotely requires more individual contact, not less’
10 EY Entrepreneur of the Year: nominee profiles
Real news has value SUBSCRIBE