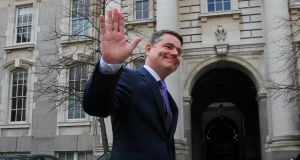 Minister for Finance Paschal Donohoe: “I will not commit to across-the-board tax cuts at this time of economic uncertainty”.

Minister for Finance Paschal Donohoe has announced only minimal changes to the personal tax code in the budget with income tax, Universal Social Charge (USC) and tax bands kept unchanged in the face of an increasingly uncertain Brexit outcome.

“I will not commit to across-the-board tax cuts at this time of economic uncertainty as to do so could potentially undermine the sustainability of our public finances,” he said.

Mr Donohoe did, however, increase the earned income tax credit for self-employed people by €150 to €1500 in keeping with his pledge to gradually equalise the tax treatment of self-employed. The new rate is still short of the €1,650 tax credit afforded PAYE workers.

There was also a €100 increase in the tax credit for home carers or partners who stay at home to mind children, older people or someone with a disability. This credit will now be €1,600. Both increases will cost an additional €27 million in 2020. Mr Donohoe also announced an extension of the reduced rate of USC for medical card holders for a further year to December 2020.

However, as previously signalled there were no changes to any of the headline rates of income tax, USC or tax bands.

Workers here start paying the top rate of 40 per cent, or 52 per cent when PRSI and USC are included, at incomes above €35,300 and Taoiseach Leo Varadkar has pledged to raise this threshold to €50,000, albeit over a series of budgets.

However, Mr Donohoe said the Government’s drive to lower the tax burden on lower and middle-income earners would have to be put on hold because of the uncertain economic outlook facing the State.

It was important to avoid a situation where decisions made this year might be reversed in the future, he said. “The unfunded tax cut of today is the unwelcome tax increase of tomorrow,” Mr Donohoe said.

Reacting to the budget, Chartered Accountants Ireland said it was essential to frame a budget for 2020 in the context of the serious damage which Brexit could do to the Irish economy.

It welcomed the change to earned income tax credit, noting it reduced an inequity in the tax system which resulted in people in employment having lower tax bills than people with similar earnings who are self-employed.

The institute noted that during the recession of 2008, the self-employed sector was particularly hard-hit. “It is therefore appropriate to move in the right direction by increasing the earned income tax credit which the self-employed primarily benefit from, by a relatively modest €150,” it said.