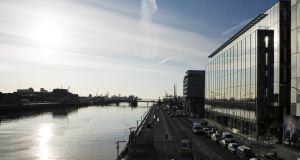 Paschal Donohoe has increased the commercial stamp-duty rate from 6 to 7.5 per cent

Minister for Finance Paschal Donohoe’s decision to raise the rate of stamp duty on commercial real-estate transactions from 6 per cent to 7.5 per cent has been roundly criticised by representatives of the property industry.

While the increase is expected by Government to generate upwards of €140 million in stamp duty revenues for the exchequer in a full year, several of the country’s leading commercial property agents described Mr Donohoe’s move as being “unhelpful”to Ireland’s efforts to attract international investment.

Savills Ireland noted that this was the second time in three budgets where the finance Minister had “unexpectedly” increased the rate of commercial stamp duty.

In Budget 2018, Mr Donohoe was the subject of widespread condemnation from the property industry when he trebled the then-rate of 2 per cent to 6 per cent.

The finance minister’s decision to increase the tax once more may well have been informed by the numbers contained in the report of the Tax Strategy Group earlier this year. According to it, Revenue collected just over € 489 million in stamp duty from commercial property transactions in the year to the end of December 2018 – or more than double the €203 million it collected in the equivalent period in 2017.

Following the latest rate hike to 7.5 per cent, Savills noted that Ireland now has the third-highest commercial stamp-duty rate in the EU. According to its data, Brussels (12.5 per cent) and Luxembourg City (10 per cent) are the only European cities with higher stamp-duty rates than Dublin. By way of contrast, the rates in London and Frankfurt are 5 per cent and 6 per cent respectively.

Savills also noted that, while the increase in the rate of commercial stamp duty would be widely perceived as a business-to-business tax, it would have a direct impact on the retirement incomes of individuals, as it would reduce the value of the property assets in their pension funds.

Marie Hunt, executive director and head of research at CBRE, said the commercial property sector was “disappointed” that the rate of commercial stamp duty had been increased yet again.

She said: “Unexpectedly increasing transaction costs is clearly unwelcome considering the reputational damage such changes make for institutional investors who already bore a trebling of this rate only two years ago.

“This increase in stamp duty will certainly have a bearing on investors’ decision-making, not least the price they will bid and pay for commercial real-estate assets from this point forward.”

While international institutional investors have been the subject of criticism in certain quarters, Ms Hunt said their involvement in the Irish market had made it “much more stable” over the last number of years.

“The Irish commercial real-estate market has become professionalised with more than half of all investment now emanating from overseas investors and institutional buyers as opposed to being a domestic debt-funded market as we were when the market crashed previously,” she said.

He said: “Ireland is currently enjoying high volumes of inward investment particularly from across Europe and Asia where we demonstrate strong relative value amongst a cohort of other major European cities. Anything that increases the overall cost for the investor is obviously most unwelcome as it makes the case for commercial real-estate investment in Ireland less compelling internationally.”

JLL’s head of research, Hannah Dwyer said the Government’s move to increase the rate of stamp duty had sent a a particular message about the transparency of Ireland’s operating processes and how they were open to government modifications.

She said: “We do not want to deter investors from investing here, and this creating a lack of clarity and stability across the market. Whilst there has been recovery in the commercial investment sector in the last number of years, we are entering a different period in the market cycle and if the changes to stamp duty create any market disruptions, it may be detrimental to activity.”

Padraic Whelan, tax partner at Deloitte added: “There has been quite a lot of commercial activity over the past four or five years so it appears the Government must be expecting that to continue strongly, given the hike in the rate to 7.5 per cent. We would advise caution to the extent that such increases, if continued in later budgets, could unduly slow down commercial activity and foreign direct investment post-Brexit.”