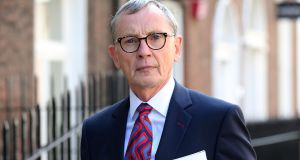 A no-fault compensation scheme should be introduced where patients are harmed in public health programmes such as screening and immunisation, according to the doctor investigating the CervicalCheck controversy.

Dr Gabriel Scally says in his latest report there is a “crying need for a change in approach” to the mechanisms used to respond on the rare occasions when harm results from error in screening programmes.

The legal processes currently in place are “deeply unsatisfactory”, he says. “They convert error into injustice, and then convert that injustice into financial remedy. The process is traumatic and filled with uncertainty for the person at the centre of the legal action and for their family.”

Dr Scally’s supplementary report, published on Tuesday, finds evidence of much greater outsourcing of Irish women’s smear tests in overseas laboratories than was previously known. CervicalCheck smears were tested in 16 labs in three countries, the report finds, rather than the six known a year ago.

However, the report has not identified any evidence that the past or present lab services used by CervicalCheck were providing a service “which does not meet acceptable standards in their country of operation”.

“The two major accreditation standards applicable in different countries appear to be comparable and do not create any cause for concern in terms of the quality of laboratory services provided.”

Members of the 221+ group of patients affected by the CervicalCheck controversy said they were particularly disturbed by the finding that one lab, in Salford, England, carried out testing for the programme for three years without CervicalCheck knowing and was retrospectively accredited by the Irish authorities.

They say they plan to seek an explanation from Minister for Business, Enterprise and Innovation Heather Humphreys about the actions of the Irish National Accreditation Board.

Dr Scally said people affected by medical errors wish to be told what happened and why; for someone to say sorry; and to be assured it won’t happen to anyone else. “If this can be achieved, many people are satisfied and they are less likely to take legal action.”

However, the difficulty in screening cases was to provide assurance “it won’t happen again” as with millions of slides being examined “it is inevitable that errors will occur”.

Established legal processes clearly fail to meet the wishes of patients, he said. A no-fault scheme, with dialogue, could bring about compensation with “listening, hearing, grace and compassion” and offer real hope “that what happened in the past shall not happen again ”.

“The goal is that an attack/defence dynamic is replaced with a discourse in which all are involved,” not just where errors occur in screening programmes but across the spectrum of medical care.

Asked about the decision by Minister for Health Simon Harris to fund free out-of-cycle smear tests for women last year, Dr Scally said he believed it was made in good faith and it was not for him to criticise it.