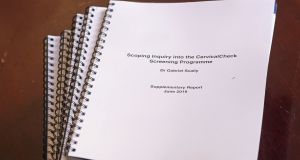 ‘From Honolulu to London, Salford to San Antonio, Scally’s report reveals that 16 labs in the US, Britain and Ireland tested smears from Irish women.’ Photograph: Niall Carson/PA Wire

Once again, Northern Irish public health doctor Gabriel Scally has delivered a report that raises disturbing questions about the cervical cancer screening programme. And once again, he has given the laboratories carrying out testing for CervicalCheck an effective clean bill of health in terms of quality.

Nine months after he delivered his “final” report into the CervicalCheck controversy, Dr Scally on Tuesday published a “supplementary” report covering outstanding issues.

Largely an exploration of the outsourcing of tests employed by the overseas labs carrying out work for the programme, and their flawed relations with Irish screening services, the latest report shows much of this work was being done at sites that had not been approved by the HSE.

From Honolulu to London, Salford to San Antonio, we now know 16 labs in the US, Britain and Ireland tested smears from Irish women. The Irish screening services appeared to be unaware its slides were being tested in many of these locations, in what Dr Scally asserts as further evidence of its governance issues.

Some of the US sites were pressed into service for only brief periods almost a decade ago, when demand surged followed the death of reality TV star Jade Goody from cervical cancer. However, the lab operated by MedLab in Salford – effectively, a room provided for a long-standing staff member who relocated from its base in Dublin – processed more than 90,000 Irish slides since 2016. Disturbingly, it was only in April 2019 that the Irish National Accreditation Board came to assess the lab and provide retrospective accreditation.

Despite these issues, the lack of transparency, and the fact that some of these labs don’t exist anymore, Dr Scally finds no evidence that any of them failed to meet acceptable standards. Similar to his final report last September, he says there is nothing to suggest deficiencies in screening quality in any lab.

His report does lay to rest a number of “red herrings” that have been raised in the debate about the US lab, in particular. The US did once offer yearly smear tests but has since moved to a three- or five-yearly schedule similar to Ireland’s. And while in the US most slides are examined by a single screener, Irish smears are double-read by two staff in US labs working for CervicalCheck.

Dr Scally has brought clarity and empathy to a fraught situation, and his work is now at an end. New appointments have been made to screening services and many of his recommendations have been implemented. There is, however, a long way to go before this controversy dies away. A UK review of the slides of women with cervical cancer, as well as the promised tribunal as an alternative to court proceedings, will not be ready until later in the year.