Cabinet to consider new report on outsourcing of smear tests 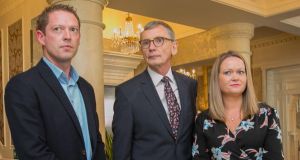 A new report by Dr Gabriel Scally into the outsourcing of smear tests to Hawaii and Orlando in the US is expected to be considered by the Cabinet on Tuesday.

It emerged last year that CervicalCheck and the HSE were unaware that a contracted US lab outsourced Irish smear tests for analysis to other US labs in Texas, Florida, Nevada and as far away as Hawaii.

The issue emerged in a report for the Government into the CervicalCheck controversy last year by Dr Scally, a public health doctor.

During a visit to CPL in Austin, Texas, Dr Scally’s scoping inquiry was “surprised” to learn that a “significant proportion of tests had in fact been undertaken in “a much smaller facility in San Antonio, Texas”.

Stephen Teap, whose wife Irene died from cervical cancer, told RTÉ’s Ray D’Arcy programme on Monday that he hoped a report into the outsourcing would be published after the Cabinet meeting.

Meanwhile, the Department of Health has said that women who have applied to a newly formed ex-gratia scheme should receive their first payments in the coming weeks.

Under a new €5 million scheme, the 221 women affected by the CervicalCheck controversy or their next of kin can apply for a payment.

The level of payment has not yet been set, but is expected to be about €25,000 each, based on the settlement reached in a court case last year.

The Department said 121 applications have been received.

“We expect that for those cases where there was a clear lack of disclosure, an ex gratia payment – this amount to be determined very shortly by the independent expert group, chaired by Mr Justice Ó Caoimh – will issue within a few weeks.”

Social Democrats co-leader Catherine Murphy is due to raise this in the Dáil on Tuesday after being contacted by families of women in the 221 group who have complained about being met “with a wall of silence” over the scheme.

One family say they have had to email multiple times to get information on the scheme and when the payments may be made.

Those affected say they have not received satisfactory replies from the designated email addresses they were given, and have been unable to find out when their applications will be processed.