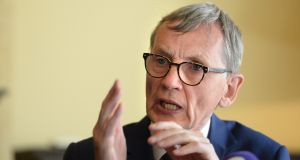 ‘In my view, there is a crying need for a change of approach,’ Dr Gabriel Scally, said.Photograph: Dara Mac Dónaill

Thousands of Irish women’s smear tests were regularly tested in unapproved laboratories overseas but there is no evidence of deficiencies in the screening quality of any lab, according to a new report into the CervicalCheck controversy.

Much greater outsourcing of Irish tests took place overseas than was previously known, the second report into the controversy by Northern Ireland public health doctor Gabriel Scally has found. The labs now known to have carried out work for CervicalCheck include 12 in the US, two in the UK and two in Ireland.

While the HSE was not aware of and had not approved some of the sites, all but one had the appropriate accreditation to carry out work for CervicalCheck, he said at the launch of the report.

Dr Scally warned the great benefit obtained from screening should not be put at risk because of the absence of satisfactory mechanisms for responding to the rare occasions when harm results. There was “a crying need for a change of approach”.

Last year, Dr Scally was commissioned to investigate CervicalCheck after it emerged hundreds of women had not been informed of the results of an audit carried out after they developed cervical cancer. In many cases, a review of their original smears produced a discordant result from the original one.

The number of labs now known to have carried out work for CervicalCheck work was 16, Dr Scally said, not six as he understood when beginning his investigation a year ago, or 11 as he reported last September. The five additional labs identified in his latest report include four operated by Quest Diagnostics in the US and a small MedLab Pathology unit in Salford, greater Manchester.

The use of many of the labs was not approved in advance by the HSE or CervicalCheck, as required under contracts, nor was it known to them.

The Salford lab operated without approval for three years but was retrospectively accredited this year for work done when its existence was unknown to the Irish accreditation authorities.

Dr Scally’s supplementary report was published on Tuesday after being discussed by Cabinet earlier in the day. Minister for Health Simon Harris and the Health Service Executive said it provided “further welcome reassurance to Irish women about cervical screening quality”.

Dr Scally said he has not identified any evidence that the past or present lab services used by CervicalCheck were providing a service “which does not meet acceptably standards in their country of operation”.

“The two major accreditation standards applicable in different countries appear to be comparable and do not create any cause for concern in terms of the quality of laboratory services provided.”

However, he said it was “profoundly disappointing” he learnt about the additional labs only through “extensive and intensive probing”. There was “very limited evidence” to show CervicalCheck was ever consulted about the use of the 10 additional labs though the screening programme should have detected their use.

The system in place in Ireland for responding to errors in screening is “inadequate to the task,” he said.

However, his inquiry team did not uncover any evidence to suggest “deficiencies” in screening quality at any laboratory.

The HSE said that of the 105 actions assigned to it in Dr Scally’s report last year, 42 have been completed, 52 are in progress and 7 due to start later in 2019. Most actions would be completely implemented by the end of 2019.