Covid quarantine centre: Many are ‘completely destitute, they have nothing’

A Dublin Covid quarantine centre opened in May and provides shelter to some of the most vulnerable people who may have contracted coronavirus or need somewhere to self-isolate. Video: Enda O'Dowd 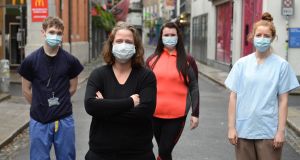 Two months ago Roger Warde was living in an apartment and working in Rotterdam. He was happy, had a girlfriend and finally felt he had some stability in his life.

However, as had happened before, his alcohol addiction caught up with him and within a few weeks he was living on the streets.

“I suffer from a bipolar condition,” Warde explains. “I didn’t attend properly to my mental health. I started living on my own and a number of factors led me back into a life of not taking my medication and drinking.

“I had a wonderful girlfriend, a beautiful apartment overlooking a wonderful river, I had everything. And that’s all gone now. When you’re dealing with homelessness and addiction, all intelligence and rationalisation goes out the window.”

Warde is speaking from his bedroom in the Dublin hotel where he has been self-isolating due to Covid-19 restrictions since arriving back in Ireland two weeks ago. He arrived in Dublin in October with the help of charity Barka. He was initially sent to the Capuchin Centre and from there was brought to an isolation unit run by the HSE and Safetynet Primary Care, where he is currently staying.

“I was living on the streets in Holland. I returned, not out of choice but necessity,” he said.

The Dublin centre, in operation since May, provides shelter to some of the most vulnerable people who may have contracted Covid-19 or need somewhere to self-isolate. Its residents include members of the Roma and Travelling community, women in domestic abuse situations, refugees who have arrived through family reunification, Irish people who have been repatriated home but don’t have anywhere to stay and people sleeping rough.

Maxine Radcliffe, the HSE clinical nursing lead for the centre, says the priority is to prevent the spread of Covid while supporting people to isolate and quarantine.

While the CityWest self-isolation facility has offered a vital service to the general public, there are always members of society who fall through the cracks, says Radcliffe.

“A lot of the people who we have here are completely destitute, they have nothing. We’ve had people come in here and they haven’t eaten for days. We also have people who come here and don’t believe Covid exists. It’s the full gamut.”

Radcliffe said she was surprised by the number of Irish residents who have arrived back in the country but have nowhere to stay. About 60 per cent of the current residents in the unit are families while one in four people have tested positive for Covid-19, she says.

Any person who tests positive stays in a room on the top floor. Residents are tested on the day of their arrival and again, seven days later. Some 60 per cent are non-Irish (mostly Europeans) and more than half do not speak English as a first language. Finding translators who have the specific skillset needed to communicate the severity of the disease to people in their native language has been a big challenge, says Radcliffe.

With a “constant stream” of people needing to quarantine since last spring, Radcliffe admits the volume of work is draining for staff.

Meanwhile, the stream of residents moving in and out continues. Warde admits he is “very unsure about the future” and says when he leaves the isolation unit he will probably be on the streets again for a while.

However, he’s glad he returned and says his time at the unit has restored his faith in Irish people. “I came back to Ireland in the Celtic Tiger and we had lost what being Irish really meant. We are good, kind-hearted people... it’s taken a pandemic for people to realise the most important things in this world are other people and relationships. I’ve seen here that there are people who genuinely care for other people. That’s something I would take away from this horrendous time in my life.”