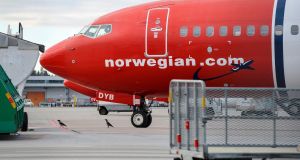 Norwegian Air’s cash crisis could force the debt-laden budget airline to halt operations early next year, the company warned as it issued another plea for rescue funding after reporting quarterly results on Tuesday.

The rapid expansion of the pioneer in low-fare transatlantic flights has left it with heavy debts, with its problems compounded by the Covid-19 pandemic. It is now serving domestic routes only, with six of its 140 aircraft flying.

“Norwegian is dependent on additional working capital in order to continue operating through the first quarter of 2021 and beyond,” the carrier said.

The company held cash and cash equivalents of 3.4 billion crowns (€319m) at the end of September, down from 4.98 billion crowns three months earlier.

Norway’s government on Monday rejected a plea for more state support for the airline, the shares of which have lost 99 per cent of their value since January, saying it would be too risky.

The company said on Monday that it would furlough 1,600 more staff, leaving only 600 people still working out its 10,000 staff before the pandemic.

“It’s not a pretty picture,” he said, adding that credit from the airline’s suppliers is likely to dry up rapidly. “This could cause a liquidity crunch in the very near term and we see few ways out for the group.”

The company said that funding could potentially come from debt refinancing, a sale of aircraft and other assets, a conversion of debt to equity or from its owners.

However, aircraft leasing companies that own more than half of the airline after swapping earlier debts for equity are unlikely to put in any new cash, a source close to one of the firms said.

“Norwegian was a credit red light for lessors even before Covid,” said the source, adding that they joined the rescue initially because liquidation would have saved only a few cents on each dollar owed and it would have had to sell aircraft in a market that was strained even before the coronavirus crisis.

With only six of its 140 aircraft now operating, down from 21 last month, most of its short-haul planes are grounded alongside its entire fleet of 37 Boeing 787 Dreamliners. – Reuters