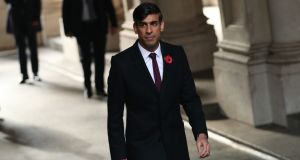 Chancellor of the exchequer Rishi Sunak: ‘I want to reassure anyone that is worried about the coming winter months that we will continue to support those affected.’ Photograph: Yui Mok/PA Wire

Layoffs in the UK hit a record high during the third quarter as the unemployment rate jumped, according to official data that showed the jobs market declined rapidly before chancellor of the exchequer Rishi Sunak made a U-turn on Covid support measures.

Redundancies rose by a record 181,000 in the three months to September to reach an all-time high of 314,000, the Office for National Statistics said. The unemployment rate rose as expected to 4.8 per cent, the highest rate since the three months to November 2016.

Mr Sunak said figures showing a record increase in redundancies and a rise in the unemployment rate “underline the scale of the challenge we’re facing”.

“I want to reassure anyone that is worried about the coming winter months that we will continue to support those affected,” he said in a statement after the publication of the data on Tuesday.