Covid-19: GPs told to be alert for possible cases from Denmark 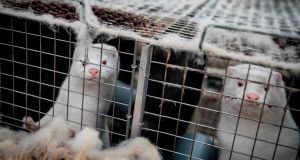 Mink look out from their cage at a farm near Naestved, Denmark. Photograph: Mads Claus Rasmussen/Ritzau Scanpix/AFP via Getty Images

The Covid clinical lead of the Irish College of General Practitioners, Dr Nuala O’Connor has said that a circular was sent to GPs on Monday to advise them to “maintain increased awareness” about the possibility of Covid-19 in patients arriving in Ireland from Denmark.

Dr O’Connor told RTÉ Radio’s Morning Ireland that the circular had been distributed to GPs at the request of the Health Protection Surveillance Centre (HPSC).

The update was in relation to people travelling from Denmark and the risk of introducing a new strain of Covid-19 linked to a mutation identified in minks in Danish mink farms.

“The 14 days of restricted movement is critical to prevent introduction of this strain to Ireland,” she said.

The circular requests GPs to “maintain increased awareness of the possibility of Covid-19 in persons who have travelled from Denmark in the previous 14 days”.

GPs are also requested to advise the person to self isolate and limit their contacts for 14 days and to arrange a Covid test for the patient if they display any symptoms.

Dr O’Connor explained that the circular was part of an ongoing service by the ICGP to its members during the pandemic, in conjunction with public health officials.

“We have to prevent this mutation becoming the dominant strain. It could affect how the vaccine works.”

Dr O’Connor said that while the virus had been mutating from when it was first identified, and that was normal, so far it had not gotten more serious. It was important that a deadlier form did not develop which was why it was important to “stop this mutation.”

The discovery of a new strain of Covid-19 in Danish mink has sparked calls for humane culling of the animals in Ireland, particularly as fur farming is due to be phased out.

Veterinary Ireland (VI), the umbrella organisation, said it would be prudent to dispose of the animals under the supervision of Department of Agriculture officials.

Dr Mark d’Alton, who was involved in the VI campaign to end the practice, said it “would be urging that on the precautionary principle, and bearing in mind that fur farming is going to be phased out anyway . . . that they should be humanely killed and the whole process expedited. That would be wise.”

However, he said he did not know what, if any, threat the mink posed here following the infection of 12 people in northern Denmark from a mutant form of the virus.

No infections have been linked to the three farms operating in Ireland. Last year the government committed to ending the practice citing veterinary evidence that it was “counter to good animal welfare”.

More mink is produced in Denmark than anywhere else. In the north of the country, the mutated strain of Covid has led to the effective lockdown of several towns in an attempt to halt its spread.

There are concerns the latest strain of coronavirus could negatively affect efforts to secure effective vaccines. But Dr Gerald Barry, assistant professor in virology at the UCD School of Veterinary Medicine who specialises in zoonotic infection – passing of disease from animal to human populations – said the discovery of a new strain in itself is unsurprising.

“The bigger finding is that mink infect humans,” he said. “That creates a kind of Pandora’s box around animals infecting humans and the possibility of animal reservoirs.”

Such reservoirs, he explained, could make it far more challenging to eradicate the virus than if it was specific to humans. Smallpox was eradicated in part because it did not find a footing among animals capable of returning it to the human population.

Denmark’s plans to cull all 17 million mink in the country following the outbreak are facing legal obstacles after the government admitted it did not have legal basis for the order.

On Tuesday the minority Social Democratic government will put forward hastily-drawn up legislation to back the cull but the opposition has said it would not allow the draft to bypass the usual 30 day legislative process. - Additional reporting Reuters