Covid-19: Level 5 restrictions likely to be eased in two stages, as planning to roll-out vaccine begins 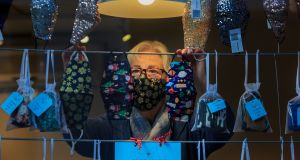 The group tasked with rolling out a Covid-19 vaccine in Ireland will meet on Monday for the first time amid growing hopes a working vaccine will be available within weeks.

The Government task force is expected to draft in business and project management experts to help ensure a speedy distribution of the first vaccines that become available.

Regulatory approval for a vaccine could be issued in the US as early as mid-December after the first application for emergency use authorisation was made in recent days. A decision by European regulatory bodies on the application by pharmaceutical giant Pfizer and a German research partner is expected to follow next month.

Task force chairman Prof Brian MacCraith has promised the group will develop a strategy to inoculate the population “urgently and comprehensively”.

The Government faces an intense week of decision-making as it finalises a plan for exiting the lockdown next week and managing the pandemic over the Christmas period and beyond.

Although final decisions have yet to be made, it is now expected that the reopening of social and commercial life will be in two stages, with a cautious lifting of some restrictions next week, and – if the numbers of new infections does not rise significantly in the coming weeks – a further reopening in advance of Christmas.

With 318 new cases reported last night, the trend is again downwards. The seven-day moving average is now 375, the lowest level since the start of October.

The decline in case numbers will give the Government encouragement as it decides in the coming days on lifting restrictions but, with no prospect now of daily case numbers falling to the target of 50-100 that was set by public health officials, the National Public Health Emergency Team is likely to urge extreme caution for the Christmas period.

The options will be discussed when the Cabinet meets on Tuesday, which is due to be followed by a Cabinet subcommittee meeting on Tuesday evening. That meeting is expected to be attended by senior Nphet figures, including chief medical officer Tony Holohan and HSE chief Paul Reid.

The leaders of the three Coalition parties are likely to discuss the issue when they have a regular pre-Cabinet meeting this evening.

A special Cabinet meeting is expected later this week, probably Friday, to agree the plan for exiting the lockdown.

A major issue to be resolved over the coming days will be situation regarding the hospitality industry. While decisions have not yet been made, it is thought unlikely that so-called wet pubs – which do not serve food – will be allowed to open. The fate of restaurants and pubs that serve food is a decision that hangs in the balance. If they are permitted to open, it is hoped that they can remain open rather than face closing again in January.

There will be intensive lobbying of Ministers and TDs over the coming days by hospitality industry representatives. In an open letter sent to Taoiseach Micheál Martin on Sunday, more than 470 hospitality and events firms argued for their sector to be reopened, and said there was “no clear evidence for the sector to be treated disproportionately with regards decisions to open or close, compared with other parts of the economy”.