WHO group recommends against use of remdesivir drug for Covid-19 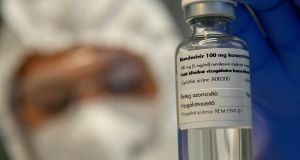 The WHO expert panel advised that remdesivir ‘has no meaningful effect on mortality,’ or on the need to put patients on ventilation. Photograph: AP.

A panel of World Health Organization (WHO) experts has advised against the use of the drug remdesivir to treat coronavirus patients, after finding “no evidence” that it improves survival rates or other outcomes.

In clinical guidance, published in the BMJ on Friday, the WHO expert panel advised that remdesivir “has no meaningful effect on mortality,” or on the need to put patients on ventilation. There was also no evidence to show the drug had an impact on reducing the recovery time of Covid-19 patients, the group said.

The recommendation was based on a new review of evidence comparing the effects of several drug treatments for Covid-19. The review drew on data from four international trials involving over 7,000 patients hospitalised with coronavirus.

US president Donald Trump was administered the experimental antiviral drug after he contracted Covid-19 in October.

The WHO Guideline Development Group said remdesivir had received “worldwide attention” as a potential treatment for severe cases of Covid-19, and has been increasingly used to treat patients in hospital. However, the expert group said despite this the role of the drug “in clinical practice has remained uncertain.”

The expert panel found “a lack of evidence that remdesivir improved outcomes that matter to patients such as reduced mortality, need for mechanical ventilation, time to clinical improvement.”

The report from the panel added there was “no evidence of increased risk of serious adverse events in patients receiving remdesivir, at least from the included trials.”

Previous trials had shown the drug to be effective on patients who require supplementary oxygen. It was originally developed by the American pharmaceutical company Gilead Sciences to treat Ebola. It was approved for emergency use in treating Covid-19 in May in the US and in Europe the following month.

In its report the WHO expert panel admitted the certainty of the evidence behind its recommendation was low. “The evidence did not prove that remdesivir has no benefit; rather there is no evidence based on currently available data that it does improve important patient outcomes,” the group said.

The panel said given the high cost of the drug, and resource implications as it has to be administered intravenously, it deemed its recommendation to be appropriate.

The WHO expert group provides “living guidelines” to doctors and clinicians in fields with quickly developing research, such as Covid-19.