EU Health Commissioner Stella Kyriakides has warned AstraZeneca that the bloc expects their Covid-19 vaccine contract to be "fully fulfilled" after the pharmaceutical company warned there would be significant shortfalls on the original schedule. 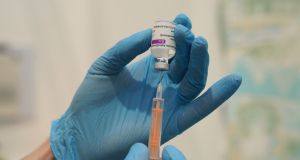 AstraZeneca has offered to bring forward the start of deliveries of its Covid-19 vaccine to the EU, while the bloc has asked the drugmaker if it can divert doses of the vaccine from the UK to make up for a shortfall in promised supplies, according to European officials.

The Anglo-Swedish company unexpectedly announced on Friday it would cut planned Covid-19 vaccine supplies to the EU in the first quarter of this year, a move that a senior EU official said would mean a 60 per cent reduction in the number of doses of the AstraZeneca vaccine supplied to the bloc in the period, resulting in the delivery in the first quarter of just 31 million doses of the vaccine for member states and a significant shortfall on the original schedule. In response, the EU threatened to block exports of coronavirus vaccines to countries outside the union, with AstraZeneca accused of failing to give a satisfactory explanation for the huge shortfall of promised doses.

It’s now understood that during two meetings with EU officials on Monday AstraZeneca offered to bring forward to February 7th the start date for EU deliveries from the initial supply plan, which was set to begin on February 15th.

Sources in Brussels said AstraZeneca had also revised upward its supply goals for February compared with the cuts announced last week, but the company offered no clarity on supplies for March. There was no offer to increase overall supplies, according to reports.

In a heated call with AstraZeneca’s chief executive, Pascal Soriot, on Monday, European Commission president Ursula von der Leyen said the company must live up to its contractual obligations on vaccine supplies. The European Medicines Agency (EMA) is expected to authorise the use of the AstraZeneca vaccine by the end of this week.

During Monday’s meetings with EU officials, AstraZeneca was also asked whether it could divert doses of the vaccine produced in Britain to EU countries, at least through March. It’s understood the pharmaceutical company has not responded to this request.

Meanwhile, the German health ministry has denied reports that the AstraZeneca vaccine is only 8 per cent effective for older people, while the pharmaceutical company said the report, which appeared in the German media, is “completely incorrect”.

Germany’s health ministry released a statement on Tuesday morning clarifying that there was no data suggesting the claim in the reports. The clarification came after German newspaper Handelsblatt published an article stating that the AstraZeneca vaccine had an efficacy level as low as 8 per cent for people over the age of 65.

A spokesman for AstraZeneca described the report as “completely untrue” and underlined that data published in The Lancet medical journal demonstrated that older adults showed strong immune responses to the vaccine, with “100 per cent of older adults generating spike-specific antibodies after the second dose”.

The German media reports resulted in fears overnight that the vaccine risked not being approved by EU authorities for use in those over 65.

A spokesman for Minister for Health Stephen Donnelly said the EMA “has to make a determination on Friday and on the basis of that the European Commission will decide on approval. Ireland will be guided by those decisions.”

Mr Donnelly confirmed on Monday that the vaccination of over-70s against Covid-19 would start next month, assuming the authorisation of the AstraZeneca vaccine by the EMA later this week. Under the Government strategy, he said, older people will be vaccinated through GPs in their surgeries in the following order: 85 and older; then 80-84; 75-7, and 70-74.

He said the Health Service Executive (HSE) was preparing a public information campaign with all the necessary details so that “everyone knows when, where and how to access their vaccine”.

However, Mr Donnelly warned the delivery of the AstraZeneca vaccine to the State would be “at the lower end” of expectations for February and would be “considerably lower” than had been assumed for March given the figures originally stated by the company for the month.

Mr Donnelly also said that “every possible resident” of nursing homes had now received one vaccine dose and that over the coming weeks, second doses would be administered to 77,000 healthcare workers.

The HSE said 45,000 healthcare workers will this week receive a second vaccine dose, as will about 3,000 residents and staff in long-term care facilities. As of Sunday, 143,000 Covid-19 vaccine doses had been administered, slightly above target, said the Minister.

On the supply side, the State is set to receive 32,760 doses of the Pfizer/BioNTech vaccine this week, compared with 24,750 doses last week when deliveries were suppressed due to manufacturing upgrades undertaken by Pfizer in its European plant.

A company spokeswoman said it was expected deliveries would increase to about 41,000 a week next week, rising to 50,000 a week in March. Under EU purchasing agreements, the Republic could receive as many as 6.6 million doses of the Pfizer/BioNTech vaccine, most of them later in the year.

A HSE spokesman said vaccine rollout plans “must be flexible to accommodate unforeseen events” and that the HSE was not “currently providing the sequencing for vaccine rollout in each of the various cohorts as schedules of delivery are confirmed on a rolling basis”.

Although the publication of daily vaccination figures has been promised, the HSE has a backlog of figures to input and validate, according to Mr Donnelly.

She said most countries had the same priority policy – putting older people and frontline workers first – and that decisions were being made on the basis of allocating a scarce resource.

Dr O’Sullivan acknowledged that people were feeling anxious and impatient but said the department was striving to ensure they get the maximum benefit from the resources available while balancing decisions with the ethical treatment of the Irish people.

She told RTÉ’s Morning Ireland programme that the National Immunisation Advisory Council’s recommendation was that those most at risk of dying or getting a serious illness from the virus come first.

Dr O’Sullivan said that it remained unknown whether the vaccination would stop onward transmission of the virus. – Additional reporting from Reuters