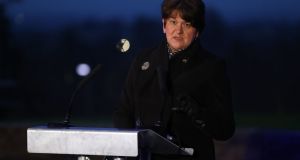 There have been 12 more deaths due to Covid-19 in Northern Ireland.

A further 670 positive cases of the virus were also confirmed on Saturday by the Department of Health.

There are 810 people in hospital with the disease including 66 who are in intensive care units.

Figures from the Northern Ireland Statistics and Research Agency (Nisra) published on Friday show there were 156 Covid-19 related deaths in the week up to last Friday, January 15th, the highest weekly number since the pandemic began.

Nisra published its latest statistics on Friday, on a day when the North’s First Minister Arlene Foster said more British military support would be available to assist in the attempts to curb the spread of coronavirus in Northern Ireland.

“I reassured the Minister that the overwhelming majority of people in Northern Ireland welcomed the support,” she said.

Ms Foster said she had been assured by the UK’s secretary of state for defence Ben Wallace on Friday that more British military aid would be provided if required to assist frontline health staff in the North to deal with Covid.

Against some criticism of the decision this week to bring in more than 100 medically trained British military technicians to assist hospital staff, Ms Foster added: “I was greatly saddened by those who have criticised this deployment for intolerant political reasons. They have placed their ideology before the needs of patients. That is an appalling indictment on their motivations in public life.”

On Thursday, the Northern Ireland Executive extended the previous six-week lockdown, which was due to end on February 6th, until March 5th. – Additional reporting PA