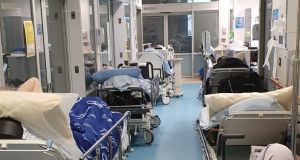 Nobody thought it would be this bad. Had we known then what we know now. There was huge demand to reopen the country. People had been locked in for November. If you had cancelled Christmas, it would have been too tough after the year people had.

These are some of remarks heard now as the State faces a hospitals emergency after the Government’s relaxation of coronavirus Christmas restrictions saw Ireland going from having one of Europe’s lowest infection rates to the highest in the world in just six, traumatic weeks.

During three weeks of increased contacts, the graph soared upwards, almost vertically – a trajectory not witnessed during the previous two waves. It took the State nine months to pass 80,000 cases. It took three weeks more to go to 160,000.

Twice as many people are in hospital, as were admitted in the first wave. Hospital ICUs are treating more seriously ill coronavirus cases. Non-coronavirus care has been affected, while outbreaks are increasing in nursing homes and residential care.

“What happened in December was we invited the tiger to tea, and the tiger ate us,” said Tomás Ryan, an associate professor at Trinity College Dublin’s School of Biochemistry and Immunology. It was a gamble.

“We really took the idea of balancing the virus and the economy to the extreme. It doesn’t work. It is like Solomon and separating the baby. You cannot do it,” said Prof Ryan, who suggested in early November that “Christmas” gatherings should be delayed for a month.

He was not alone in being worried. The Government went against the advice of the National Public Health Emergency Team (Nphet) which warned that the State could have hospitality, or household meet-ups, but not both.

Faced with the desire for a “meaningful” Christmas, the Government rejected the data analysis from consultants EY recruited by the Department of the Taoiseach, who showed that increased socialisation led to higher infections during the autumn.

Nphet stressed, in bold writing in its letter, that if restaurants and food-serving pubs reopened, then the recommended household mixing over the two weeks “could not also take place”. The State was in a “very precarious position”, it warned.

The next day, the Government announced it would permit households to mix with up to two other households from December 18th but it would reopen hospitality before that, from December 4th, permitting six people to dine indoors in restaurants or gastropubs.

Three days later, Taoiseach Micheál Martin explained his decision to The Irish Times: “There are limits to which a government can lock people up for a prolonged period of time, to be crude about it, and we have to get the balance right. This is about balance.”

The average number of close contacts of coronavirus cases peaked at just over five over Christmas. Looking back, Kingston Mills, professor of experimental immunology at Trinity College, says the Government made a mistake.

“I said it at the time that we were inevitably going to have a resurgence of significant numbers of cases if they opened up the hospitality sector and allowed people to socialise more than they had been.

“Everybody thought that was going to happen, including the Government,” he said, “there was no surprise. If there was a surprise, it was the numbers, that they went up so high. Everybody expected to see a rebound at the end of December and early January.”

Infection numbers were high even before the relaxations came in. Dr Breda Smyth, director of public health at HSE West, which covers Galway, Mayo and Roscommon, said local rates were “really nowhere close” to where they should have been to withstand a Christmas surge.

Since then, Dr Smyth has found infections from Christmas house parties and family gatherings. Large groups got around the six-diner rule by booking multiple tables. In some cases, everyone went back to houses later.

The new, more infectious UK virus strain had not seeded sufficiently here to take off, accounting for only a small share of the Christmas infections. Data presented at Nphet briefings suggest between 75 per cent and 92.5 per cent of December infections were the non-UK strain.

Alcohol creates “the perfect breeding ground for infection”, said Dr Smyth, “it was the socialisation, the socialisation with alcohol in indoor venues really which has driven the transmission”.

Travel helped, too. More than 54,000 people travelled into the State between December 21st and January 3rd. Of the passengers from the United Kingdom who have tested positive, 50 per cent had the UK variant, which helped to seed the post-Christmas cases.

“It was almost like a perfect storm. There was increased socialising, more than expected, after six weeks of lockdown that was tough for people, so there was pent-up demand,” said one source, who declined to be named.

Four days before Christmas, as a third wave was declared, chief medical officer Tony Holohan advised people to stay at home and stop socialising. The next day, the Government brought forward the planned closure of hospitality but allowed households to mix, if on a declining scale.

The inter-generational mixing over Christmas led to the transmission of the virus to older and more vulnerable people, said Dr Smyth. The case growth since has been “soul-destroying”, an “absolutely heart-wrenching disappointment”.

Dr Smyth, a member of Nphet, said she fully supported the group’s recommendations contained in the November 26th letter, which was “the vision of what was likely to occur”.

“It came to pass, unfortunately,” she said.

Looking back, Prof Ryan, a member of the Independent Scientific Advocacy Group which supports a “zero Covid” strategy, argues that the Government failed to lead the public to make difficult choices on “how we live as a society under the pandemic”.

However, ICU doctor Catherine Motherway at University Hospital Limerick, which on Thursday had the highest number of hospitalised coronavirus patients in the State, said many people “just forgot there was a pandemic” over Christmas.

Everyone will have to learn lessons: “We can’t socialise without being immune. While we await for the population to gain immunity, hopefully through vaccination and not disease, we all need to be very careful, regardless of what the Government decides,” she said.