Six out of 10 people staying with 10km of home, CSO data shows 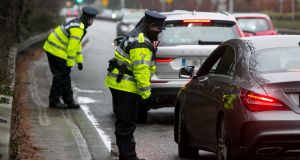 Garda checkpoint on the Navan Road during the Level 5 restrictions. Photograph: Gareth Chaney/Collins

An estimated six out of 10 people stayed within 10km of their homes during the second week of the January lockdown period, according to data published today by the Central Statistics Office (CSO).

The Staying Local Indicator insight series, published on Monday for the first fortnight in January, shows Dubliners were most likely to stay close to home during the current pandemic, while people in Roscommon, Mayo, Tipperary, Sligo, Donegal and Longford were more likely to travel further than 10km from their homes during the restrictions.

Under the current Covid-19 restrictions, people are required to stay within 5km of their home and only travel for work, education or other essential purposes.

Nearly 79 per cent of Dublin residents stayed within 10km of their homes during the second week of January, according to data provided to the CSO, no doubt reflecting the easy access to shops and supermarkets for food and other essential goods in the Irish capital.

In Wicklow, nearly 68 per cent of people remained within the 10km radius while in Louth, just over 67 per cent stayed within the same distance.

Overall, an estimated 66.2 per cent of the entire population stayed within 10km of home during the second week of January based on the seven-day rolling average analysis.

The indictor also shows movement beyond 10km hit an annual low on Christmas Eve at 51.7 per cent before rising to 66.2 per cent by January 15th.

Those moving further than 5km from their homes are increasingly facing €100 spot fines being handed out by gardaí. While the fines had been available to gardaí as an enforcement tool for some time, Garda Commissioner Drew Harris had previously instructed all cases be routed through the DPP’s office.

However, from January 11th, a change in the systems allowed gardaí to impose fines without direction from the DPP. By the end of last week, more than 1,000 of these fines had been imposed on people travelling for non-essential reasons.

Gardaí also set up checkpoints this weekend on approach roads to and from Dublin airport in an attempt to crackdown on international travel with checkpoints also running at other airports and ports across the State.

The Staying Local Indicator, which was set up in response to the Covid-19 pandemic, is based on an analysis of anonymised, aggregated, mobile phone activity records belonging to Three Ireland, which are shared with the Department of Health.

In a statement, the CSO underlined that the data provided by Three Ireland was “limited to informing the Government response to the Covid-19 pandemic only” and that no personal data and only aggregated statistical data was provided.

“At no time do either the Department of Health or the CSO have access to personal data or individuals’ movements”, said the statement.

In an FAQ section, the CSO said the data provided by Three Ireland would not be used for any other purpose aside from the Staying Local Indicator during the Covid-19 pandemic.

The CSO states that its indicator is not an exact measure but a “general indication” of what percentage of the population is staying local based on Three Ireland figures which holds around 35 per cent of the State’s mobile phone market share.

The CSO research is premised on the assumption that mobility patterns among Three phone users are broadly representative of those of the wider population.