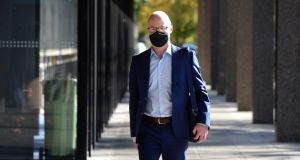 A further two people diagnosed with coronavirus have died and 814 new cases have been reported, the National Public Health Emergency Team (Nphet) said on Sunday.

Sunday’s figures bring to 1,826 the number of people who have died of the disease in the Republic of Ireland with a total of 42,528 cases confirmed in the State since the start of the pandemic.

As of 2pm on Sunday 204 Covid-19 patients are hospitalised, of which 30 are in ICU with 16 additional hospitalisations in the past 24 hours, Nphet said in its daily update.

Chief Medical Officer Dr Tony Holohan said: “It is vital that the entire population consistently implement public health advice into their daily lives; keep your social contacts to an absolute minimum and keep physical distance when you need to be out of your home.

On Saturday Nphet reported 1,012 new cases of the disease. This was the highest number of cases in a single day since the height of the pandemic on April 15th, when 1,068 were recorded.

Over the weekend, public health officials issued stark warnings about the spread of Covid-19 and the number of people in hospital with the disease passed 200. As of 8am on Sunday there were 201 Covid-19 patients hospitalised, of which 30 were in ICU. At 8pm on Saturday night there were 198 confirmed cases in Irish hospitals and 103 suspected cases. According to the HSE’s daily operations update, of the confirmed cases, the highest number (22) was in Cavan, followed by Beaumont (21), Tallaght (18) and Cork University Hospital (15).

Earlier, Taoiseach Micheál Martin asked the public to change their behaviours so “we can make Level 3 work, protect lives and livelihoods” and stop Covid-19 spreading.

Mr Martin said in a statement on Sunday the move to Level 3 involved tightening coronavirus restrictions on people and society, which particularly affected the hospitality sector.

“Covid-19 is challenging countries across Europe and throughout the world,” he said.

“The coming weeks will be challenging but working with Nphet, we will respond firmly and appropriately. We have the capacity and resources to come through this and we will.

Minister for Health Stephen Donnelly has said that “for next few days and weeks the figures are going to get worse” for Covid-19.

“New cases are doubling about every 16 days” Mr Donnelly said on RTÉ radio’s This Week in Politics programme on Sunday. At the height of the pandemic the rate doubled every five or six days.

Mr Donnelly said it was important “not to look at any individual day but to look at trends”.

The reproduction or R0 number for the country is 1.2. Dublin has a reproduction rate for the virus of 1. He said an “extra push for Dublin could produce positive results for Dublin”.

He added: “The R0 for the rest of the country is 1.6, which is very high and that is why we are in Level 3 for the country.”

“The initial indications in Dublin are positive and we now have the opportunity working together to say we’re going to embrace this.”

Mr Donnelly said the State also planned to introduce coronavirus testing at airports as part of a possible alternative to quarantine for some arriving passengers, although it is not clear when the capacity will be ready.

Airlines Ryanair and Aer Lingus have heavily criticised the Government for imposing some of the strictest travel restrictions in Europe, with 14-day quarantines advised for almost all incoming travellers.

Questioned about the Tánaiste’s suggestion of a “circuit breaker” lockdown, which is a short national lockdown, Mr Donnelly said “it’s not being considered right now”.

He said: “This week’s figures are not a reflection of whether we should be in the so-called circuit breaker.”

Mr Donnelly said some time ago Singapore trialled the Level 5 circuit breaker for about three months and it seemed to have worked. Israel is the only country doing it now at Level 4 and the indications are positive.

“The fact that Level 4 and 5 are in the framework it’s implicit that at some point we might have to go there” but he said they were not considering it now,” he said.

Chief Medical Officer Dr Tony Holohan said on Saturday night: “I am very worried about the numbers we are seeing and how quickly they are deteriorating.

“All of the important indicators of the disease are deteriorating. For example, there has been a consistent increase in test positivity over the past week. The test positivity rate up to midnight Friday October 9th was 6.2 per cent, which has more than doubled in less than a fortnight.

“Case numbers are growing across all age groups and throughout the country.”

Tánaiste Leo Varadkar said a “circuit breaker”... “may well be needed at some point,” writing in the Sunday Independent.

“I know some say that a circuit break could save Christmas. I am not so sure. The problem is that when you’re in full lockdown it’s difficult to get out of it,” he wrote.

On Monday, the Government rejected the Nphet’s advice to move the country into a national lockdown for four weeks. Instead opting to put the country on Level 3 of its Living with Covid-19 plan, which entails restrictions on restaurants, pubs, and movement between counties.

Senior medical leaders believe that while the hospital system is challenged it is not overwhelmed at this stage, the head of the Health Service Executive (HSE) has said.

Paul Reid said that the HSE’s chief clinical officer as well as lead consultants across the country in intensive care and emergency medicine had advised him up to Sunday morning that the hospitals were “coping”.

He said their advice was that the situation was “continuously on watch”.

Mr Reid told RTÉ on Sunday that the advice to him was that the “system has not been overwhelmed right now”.

He said that situation could change very quickly and it needed to be monitored carefully.

“I will take my lead ultimately from our senior consultants and that it how they are decribing it right now.”

Mr Reid said HSE senior management would be taking a site-by-site look at the situation in hospitals on Monday morning.

The HSE chief said the health service wanted to see 1,400 additional beds, which either had already been introduced on a temporary basis earlier this year or promised under the new winter plan to be “sustained throughout next year”. He said this was being discussed as part of the current financial estimates ahead of the Budget next week.

Mr Reid said the HSE in the first phase of the Covid-19 pandemic had put in place about 800 additional beds – 400 in level four hospitals and 400 in level two hospitals.

He said under the winter plan a further 590 beds were to be provided.

Meanwhile, Minister of State for Further Education Niall Collins of Fianna Fáil said Government would consider moving other counties where the virus continues to spread rapidly, like Donegal, to stricter levels under the plan.

“The figures are trending in the wrong direction, they are stabilising in Dublin that being said, so let’s see how it goes over the next number of days,” he said on RTÉ’S This Week programme.

“If we have to go on different levels for different counties of course that is a consideration that can be taken, or if we have to move the entire country up a level or two levels, that will be a decision, which will be taken based on all the best advice.”