‘We can make Level 3 work’: Taoiseach says Ireland has the resources to cope with Covid 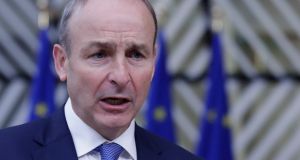 Taoiseach Micheál Martin has asked the public to change their behaviours so “we can make Level 3 work, protect lives and livelihoods” and stop Covid-19 spreading.

Mr Martin said in a statement on Sunday the move to Level 3 involved tightening coronavirus restrictions on people and society, which particularly affected the hospitality sector.

“Covid-19 is challenging countries across Europe and throughout the world,” he said.

“The coming weeks will be challenging but working with Nphet, we will respond firmly and appropriately. We have the capacity and resources to come through this and we will.

“An unprecedented level of resources have been allocated to the health services, both in the Winter Plan and throughout the entirety of 2021.”

Earlier, public health officials have issued stark warnings about the spread of Covid-19 after a further three people died and record number of new cases were recorded.

The National Public Health Emergency Team (Nphet) said on Saturday a further 1,012 new cases of the disease were reported. It is the highest number of cases in a single day since the height of the pandemic on April 15th, when 1,068 were recorded. It is only the third time daily case numbers have risen above 1,000.

On Sunday HSE chief Paul Reid said the disease was “worsening at pace”. In a Tweet he added: “We all need to get real & play our part to protect patients & our healthcare workers.Increased hospital cases leads to more people in ICU & cancelling heart, cancer & other care.Let’s turn this around quickly by doing the right thing today.”

Saturday’s figures bring to 1,824 the number of people who have died of the disease in the Republic of Ireland with a total of 41,714 cases confirmed in the State since the start of the pandemic.

As of 8am on Sunday there were 201 Covid-19 patients hospitalised, of which 30 are in ICU. At 8pm on Saturday night there were 198 confirmed cases in Irish hospitals, 103 suspected cases. According to the HSE’s daily operations update, of the confirmed cases the highest number (22) was in Cavan, followed by Beaumont (21), Tallaght (18) and Cork University Hospital (15).

I am very worried about the numbers we are seeing and how quickly they are deteriorating.

All of today’s 1,012 cases were notified to @hpscireland over a period of 24 hours up to midnight.

All of the important indicators of the disease are deteriorating...
(1/3) https://t.co/b9bij8DRE4

Confirmed cases of Covid-19 have risen almost fourfold in Irish hospitals over the past month, the figures show. Over the same period, there has been an even greater increase in the number of patients admitted to intensive care units (ICU) with coronavirus.

The high and rising number of cases and hospitalisations will prompt a further examination of the Government’s strategy to contain the spread of coronavirus having rejected advice from Nphet last weekend to move the State to the most severe Level 5. Instead it moved the country to Level 3 on the five-level alert system.

Chief Medical Officer Dr Tony Holohan, said on Saturday night: “I am very worried about the numbers we are seeing and how quickly they are deteriorating.

“All of today’s 1,012 cases were notified to the HPSC over a period of 24 hours up to midnight.

“All of the important indicators of the disease are deteriorating. For example, there has been a consistent increase in test positivity over the past week. The test positivity rate up to midnight Friday October 9th was 6.2 per cent, which has more than doubled in less than a fortnight.

“Case numbers are growing across all age groups and throughout the country.”

Deputy Chief Medical Officer Dr Ronan Glynn said on Saturday: “In the past 24 hours, there have been 35 new admissions of laboratory confirmed cases to hospital and 4 new admissions to ICU. There are now 199 people in hospital and 31 in ICU. Every age group, location and household needs to act now, limit your contacts and stop the disease in its tracks.”

In the North, another 902 people tested positive for Covid-19 but no new deaths were reported on Saturday.

The figures come as a family doctor in Cork warned rates of infection are escalating “really, really quickly” and are going to get worse over the coming weeks.

General practitioner Dr Ronan Boland said “the picture has changed pretty dramatically in the space of three or four weeks.”

“We’ve gone from a situation when the schools reopened in early September, when there was a huge demand for testing and the vast majority of those tests were negative.. (to) now, what we are actually seeing, a much higher positivity rate,” he said.

Dr Boland said Covid hubs set up by the Health Service Executive (HSE) towards the end of the first wave of the pandemic, which were “almost not needed” at that stage, are now operating at full capacity.

The majority of patients turning up at the hubs are testing positive for the disease and “most of them (are) quite sick” while some are being admitted by ambulance directly from the hub to hospital, he told RTÉ Radio One.

Dr Boland said GPs looking to refer patients to hubs can not get an appointment “because it was over capacity on the day.”

Most GPs in Cork city have had several patients testing positive, he said, adding that the city’s hospitals “are pretty much at full capacity”.

Some 50 people were waiting for hospital beds in the city yesterday and there are only two vacant ICU beds, he said.

“What we are seeing in terms of actual cases reflects infections that happened seven to 14 days ago, so even if level three (of the Government restrictions to stem the spread of the virus) worked today, what you can say with certainty is that things are going to get worse over the next two or three weeks before they get better,” Dr Boland added.

The “fervent hope” is that the level three restrictions will work in reducing the rate of increase of infection and illness as it “has grown very, very rapidly and the capacity simply isn’t there to deal with a big increase in very sick patients over the next few weeks.”