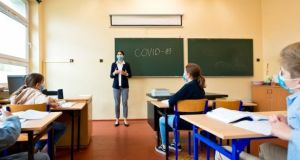 The Minister for Health has said schools will not extend the October midterm break. Photograph: iStock

There is no plan to extend the school mid-term break, Minister for Health Stephen Donnelly has said.

“It is not going to be extended,” he confirmed.

“We have emerging and mounting evidence of the educational cost” to children of school closures.

The minister was reacting to reports on Friday that the midterm break in schools may be extended in October and that the idea had been discussed informally at Cabinet.

Stressing that “there isn’t going to be a longer mid-term break”, he said the evidence is that the schools are not contributing to rising Covid-19 cases.

He said the number of children contracting the virus before and after the schools re-opened was about the same. “The reports I’m getting is that schools are safe for children, that there’s a very low level of transmission than for adults.”

It was similar to evidence from across the world and in line with the WHO (World Health Organisation’s findings.

Earlier Minister of State for Further Education Niall Collins has said the Government had “absolutely no plan” to close schools for an extra week during the coming mid-term break, despite such a move being briefly discussed.

“There is absolutely no plan to close our schools beyond the traditional one-week break,” Mr Collins told RTÉ’s This Week in Politics show on Sunday.

“I don’t think the parents of children, and the children themselves would thank us if we were to close schools,” he said. “The schools remaining open are a huge priority of this Government,” the Fianna Fáil TD said.

Students who took up rented accommodation run by colleges or private providers should be refunded the costs as classes have moved online due to Covid-19, he said.

Meanwhile, Prof Philip Nolan of the National Public Health Emergency Team (Nphet) has said the reopening of schools has not in any way changed or accelerated the trajectory of the Covid-19.

While he declined to comment on reports that schools could close for longer around mid-term, Prof Nolan said there was no evidence to show that schools are a locus of transmission of the virus.

“In fact, the numbers of cases in the four to 18-year-old age band has grown less quickly than the number of cases in the wider population. It appears this age group is largely picking up the virus in family and community settings and not in schools ,” said Prof Nolan, who chairs Nphet’s Epidemiological Modelling Advisory Group.

A spokesman for the Department of Education also said latest evidence demonstrates that schools have reopened safely supported by prevention and control measures recommended by the public health authorities.

As of October 6th, there has been mass testing of 5,890 students and teachers across 236 schools, on foot of public health risk assessments. These tests identified an additional 90 cases over and above the original cases, which equates to a rate of1.5 per cent compared to the community rate of 6 per cent.

“Public health has confirmed that they are casting their net wide with mass testing in schools to assess evidence of levels of transmission and that this low rate supports other evidence that schools are safe environment for staff and students,” the spokesman said.

He added that there was no significant change in the proportion of total weekly Covid-19 cases attributable to school-aged children before and after the reopening of schools.

This, he said, supported the hypothesis that children are not at increased risk from Covid-19 in the school setting.

School managers, who oversee the running of the primary and secondary schools, said they have been told by Department officials that there are no plans to close schools for longer at mid-term.

A number of senior school management sources, speaking on condition of anonymity, said they were told that while this approach was been looked at in Northern Ireland, there was no desire to do the same in the Republic at this stage.

One Cabinet minister - who declined to be named - confirmed that the option of closing schools in the context of a “circuit break” or moving to Level 5 had been discussed briefly, but it was impossible to say if or when this might occur.

“There are a lot of hoops to go through before we’re at Level 5. Maybe that will be earlier or later than the school mid-term, who knows,” the source said.

“Whenever that happens, it is likely that schools might close. There is a logic to cutting down the movement of up to one million people, but we’ll be guided by the public health advice.”