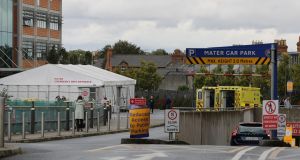 The temporary A&E entrance at the Mater hospital: In some hospitals, including the Mater, intensive care is full or just about full, and in some areas elective services are already being curtailed. Photograph Nick Bradshaw

The announcement on Sunday of 430 new cases of Covid-19, the highest daily figure since April, may have scared a lot of people. But the figure needs to be seen in the wider context of modest improvement in trends over the past week – and limitations and caveats that attach to daily case numbers.

Figures on Sundays, for example, tend to be higher than average; often offset by lower than average numbers on Mondays. More importantly, daily case figures give only an indication of the number of infections out there, and they tell us nothing about the ability of the health service to cope.

The daily figure just tells us the number of people who have tested positive for the virus. It is likely to include a small number of false positives. The test may fail to detect the virus in some people in whom it is incubating.

Meanwhile, many other cases will elude detection because the person is not showing symptoms or fails to go for testing.

The more testing we do, the fewer undetected cases. A high rate of positive tests is taken as an indication significant numbers of cases are not being detected.

Ireland’s positivity figure has been increasing recently but, at 2.8 per cent in the past week, it is still fairly average by European standards.

Fewer than one in five of those diagnosed with Covid-19 will end up in hospital. This is an important figure, not just because of the personal ramifications but also because of its impact on the health service. Should hospitals become overwhelmed with cases, as happened in Italy in the early stages of the pandemic, the death rate shoots up.

The number of hospitalised virus patients has been trending steadily upwards since August, from a low of eight at the start of August to 108 on Sunday. The past few days have seen numbers stabilising; the figure actually fell by two over the weekend.

It is difficult to put this in context. The numbers are a long way off the peak of 881 hospitalised patients recorded in mid-April. This is because cases are occurring among younger, healthier patients, fewer of whom need medical attention.

Earlier this month, our hospital admission rates relative to population were the second lowest of 17 European countries (after Germany). Those who are hospitalised now will probably spend less time there, thanks to better treatments becoming available and earlier recognition of vital symptoms.

Some will end up in intensice care units – 17 are there at present – down from 18 the previous day.

By way of comparison, more than 11,000 cases of influenza were confirmed last winter, 4,332 patients were hospitalised and 154 required admission to ICU. There were 110 deaths. Two years earlier, during a bad outbreak, there were 255 flu deaths.

So what is unfolding at present is not unusual for a virus, though Covid-19 is more contagious than flu and could therefore wreak more havoc in certain populations should it continue to spread.

The other fear doctors have is of a “twindemic” of Covid-19 and flu this winter. More than overwhelming the system, arguably the danger is that Covid-19 could be “the straw that broke the camel’s back”.

In spring, the health service abandoned virtually all normal activity to make way for the feared surge of Covid-19 cases. The difference now is that the service is attempting to provide something close to a normal activity, while coping with an increase in coronavirus cases.

Also during the spring, extra critical beds were created on a temporary basis and staff were drafted in from other areas to work on them. Now these nurses and doctors have gone back to their primary duties.

On Sunday, 223 critical care beds were occupied, just 17 of them by virus patients. And although 48 such beds were free, in some hospitals – including the Mater, St Vincent’s and Tallaght – intensive care is full or just about full, and in some areas elective services are already being curtailed.

The HSE’s winter plan promised an additional 17 ICU beds, but even doctors working in the area are confused as to what baseline this is being calculated from – the 257 beds that were open at the start of the pandemic or the 280 beds created when capacity was increased?

Because of tight numbers, even a small increase in serious Covid-19 infections would overwhelm ICUs, they argue, leading to more deaths.

The capacity issue needs to be resolved, not just for this wave of cases but also for future ones that occur after restrictions are again lifted.

1 One hundred Irish retailers for all your online Christmas shopping
2 Covid-19: Pressure over breakdown in tracing system intensifies as State enters Level 5
3 Nearly 400 Brazilians have tested positive for Covid-19 in Ireland, data shows
4 Gym owner plans to defy restrictions and open
5 Miriam Lord: All test and no trace makes Jack, and heaven knows who else, a very ill boy
Real news has value SUBSCRIBE