UK faces new restrictions as over 12,000 people diagnosed, and 65 die of coronavirus 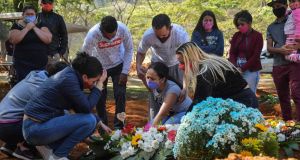 Relatives mourn during the burial of 65-year-old Maria Joana Nascimento in August, who died suspectedly from the coronavirus, at Vila Formosa Cemetery, in the outskirts of Sao Paulo, Brazil. Photograph: Nelson Almeida/AFP/Getty Images

New cases of Covid-19 in the United States hit a two-month high on Friday with more than 58,000 infections reported as Brazil surpasses 150,000 coronavirus deaths.

In the US, hospitalisations in the midwest at record levels for a fifth day in a row, according to a Reuters analysis.

Ten of the 50 states reported record one-day rises in cases on Friday, including the midwestern states of Indiana, Minnesota, Missouri and Ohio. Wisconsin and Illinois recorded over 3,000 new cases for a second day in a row – a two-day trend not seen even during the height of the previous outbreak in the spring, according to Reuters data.

The western states of Montana, New Mexico and Wyoming also reported their biggest one-day jumps in cases, as did Oklahoma and West Virginia.

Nineteen states have seen record increases in new cases so far in October. Amid the resurgence in cases across the nation, president Donald Trump, who recently contracted Covid-19, addressed his supporters from the balcony of the White House on Saturday, a prelude to restarting his re-election campaign.

He is scheduled to travel on Monday to Florida. He declared that the pandemic, which has killed more than 213,000 Americans, was “disappearing”.

Mr Trump and his administration have faced criticism for their handling of the pandemic, as well as for a lax approach to mask-wearing and social distancing in the White House.

While deaths nationally continue to trend downward, the US is losing on average 700 lives a day. Three states reported a record one-day increase in fatalities on Friday: Arkansas, Missouri and Montana. Health experts caution that deaths are a lagging indicator and usually rise weeks after cases climb.

The number of people who succumb to Covid-19 is expected to accelerate this winter.

The country’s daily death rate is projected to more than triple by mid-January to 2,250, with an overall 395,000 fatalities by February 1st, 2021, according to a new update of the University of Washington’s widely cited model.

But if Americans increase their wearing of masks to the level seen in Singapore, the February 1st death toll would drop to 316,000, saving 79,000 lives, according to the University’s Institute for Health Metrics and Evaluation, whose model has been cited by the White House Coronavirus Task Force.

Currently, there is no federal mandate to wear a mask, and 17 states do not require them.

The British government said that, as of 9am on Sunday, there had been a further 12,872 lab-confirmed cases of coronavirus in the UK. It brings the total number of cases in the UK to 603,716.

The government also said a further 65 people had died within 28 days of testing positive for Covid-19 as of Sunday. This brings the UK total to 42,825.

Separate figures published by the UK’s statistics agencies show there have now been 58,000 deaths registered in the UK where Covid-19 was mentioned on the death certificate.

Millions of people could be banned from mixing indoors and outdoors and thousands of pubs forced to close under new coronavirus restrictions due to be announced in Britain on Monday.

Britain’s prime minister Boris Johnson is set to outline a new three-tiered system of restrictions with measures expected to force pubs and restaurants shut across the north of England.

Reports suggest under the top tier no household mixing will be allowed either, which could affect millions of people living in areas with high Covid-19 rates across England.

Leaders across northern England criticised the plans, accusing the Government of treating the region as “second-class” and did not rule out possible legal action.

But the Sunday Times reported ministers were drawing up proposals to give town halls more powers over the test and trace system to try to secure their support.

Under the proposed three-tier system, different parts of the country would be placed in different categories, with areas in the highest level expected to face the toughest restrictions.

In north Wales, new coronavirus restrictions were introduced in Bangor at 6pm on Saturday, meaning people will not be allowed to enter or leave the area without a “reasonable excuse” and can only meet people they do not live with outdoors, it said.

The number of new coronavirus infections in France was 16,101 in the last 24 hours, down from a record of almost 27,000 the previous day, health ministry data showed on Sunday.

The figures took the cumulative total to 734,974 since the start of the year. The number of deaths from the virus increased by 46 to 32,730.

New cases are generally lower on Sunday because fewer tests are taken over the weekend.

India’s coronavirus case tally topped 7 million after it reported 74,383 new infections in the last 24 hours, data from the health ministry showed on Sunday, even as the spread moderated in western states such as Maharashtra.

India added a million cases in just 13 days, according to a Reuters tally of government data, and it has the second-highest number of infections, behind the US which is approaching the 8 million mark. – Reuters