It is time for big, radical decisions to support those suffering most

Imagine the bailout that would be given if the virus affected lawyers, bankers, politicians? 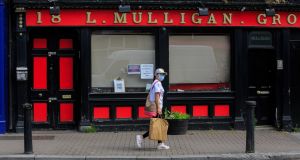 Pubs and restaurants are at the epicentre of all this. Where is the data that says they are the spreaders of the virus? Photograph: Gareth Chaney/Collins

Economic downturns and recessions save their greatest consequences for those who are least able to deal with them. But not always: slumps can hit the rich as well, particularly if the stock market joins in with the economy. While the middle and professional classes sometimes take a hit to their jobs and incomes, it’s more often the hourly paid, minimum waged, less well-skilled (at least conventionally measured) who are most affected when the economy takes a turn for the worse.

We don’t have full data - the downturn is far from over - but this slump looks to be very different to past shocks. Many of us, in financial terms at least, have barely noticed. Like the virus, the recession has been unusually uneven in its incidence: we know how badly affected are specific sectors, particularly hospitality, tourism and the arts. Sectors like construction took a massive hit during the full lockdown, but have staged a relatively robust recovery. Pubs, restaurants, theatres and cinemas are struggling: some have closed, perhaps permanently. Many others are not likely to survive existing restrictions, let alone the additional ones we fear are just a matter of time.

Many workers in a relatively narrow range of sectors have lost their jobs. Anyone still hanging on is faced with the fear of imminent unemployment. The financial impact of all this is obvious; the psychological and broader social consequences of the resulting anxiety will take years to be repaired, if ever.

This is not your father’s unemployment crisis. It’s not about an oil price shock, interest rates going up, offshoring of jobs or technological change. It’s a radically different problem requiring radical solutions. It’s not a time for policy timidity, conservatism or, in particular, fiscal orthodoxy. The deficit scolds have never gone away and are already warning about the consequences of government borrowing. Such warnings are appropriate in more normal times, but couldn’t be less relevant today.

Let’s try a thought experiment. Imagine the virus had a different sectoral impact. Imagine the legal and accountancy professions had been shut down. With their massive lobbying power and political connections, what kind of bailout would have been demanded and granted? Imagine the virus cutting the salaries and jobs of only TDs and the civil service. What, we might wonder, would have happened next? Imagine this crisis had affected only the banking sector: we have the script for that one.

The money is there. The Government says borrowing this year is going to be multiple billions short of the €30 billion that seemed likely only a few weeks ago. When we thought €30 billion was the number, the bond market - the arbiter of whether we can do this - yawned. So why not borrow these kinds of numbers to give additional supports to those people and businesses that need them?

I cannot understand why the Minister for Finance has decided to raid the “rainy day fund”. It looks superficially obvious: it’s raining. €1.5 billion isn’t that big a deal, but would once upon a time have been the “fiscal space” available on budget day. It’s now an almost anachronistic concept, but the space available to Paschal Donohoe is considerable, thanks to those benign bond markets. It’s mostly up to the European Central Bank how long those friendly borrowing conditions last - if they pull the plug prematurely, the political consequences will be explosive across the European Union. They aren’t going to risk that.

Cheap money won’t last forever, so let’s avail of it while we can. Mr Donohoe is taking cash from a fund that is earning, I presume, a healthy positive return: the money, by all accounts, is invested wisely. From an opportunity cost perspective, that’s borrowing at a relatively expensive rate of interest when the markets are paying you to borrow. I may be missing something, but it doesn’t make financial sense and is worryingly consistent with fiscal orthodoxy that doesn’t apply today.

Pubs and restaurants are at the epicentre of all this. Where is the data that says they are the spreaders of the virus? In this era of big data, I am astonished it is next to impossible to get reliable numbers on where people are catching coronavirus. There are plenty of suggestions, correlations and hunches. Medics say “the virus loves alcohol”. The data, such as it is, generally relies on asking people who have tested positive, “where have you been in the last 14 days?” That’s correlation, not causation: suggestive rather than definitive. Public health messaging should by now be hammering away, every day, at the definitive lists of where we are catching Covid-19. Big data? Where is it?

People who have access to better data than me say hospitality is the problem. Given that, the authorities should either reject that advice - let them trade with strict hygiene and social distancing rules - or shut them down and give them enough money to survive until the scientists say we can reopen them. There really isn’t a middle way. It is time for big, radical decisions. That, by the way, includes spending money on getting some proper data.