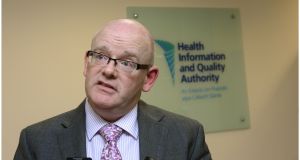 Hiqa CEO Phelim Quinn. Not routine for Hiqa to inspect standard of infection contol on every inspection. Photograph: Brenda Fitzsimons

Almost one in five nursing homes inspected for infection control in 2018 were not complying with rules to prevent and control the spread of infections, a regulatory report shows.

The Health Information and Quality Authority (Hiqa), carried out 542 inspections of nursing homes in 2018 – the most recent year for which data on inspections is available – and checked 215 homes to see whether infection prevention and control rules were being met.

The health watchdog found that 39 of the 215 nursing homes were not following infection control rules under regulation 27 of the Health Act 2007. This was a non-compliance rate of 18 per cent.

Infection control in nursing homes – both private and public – has become a major issue in the Covid-19 pandemic as residential care settings and nursing homes account for more than 60 per cent of the deaths.

The elderly population is most at risk from the coronavirus disease. Almost 80 per cent of more than 1,500 people who have died from Covid-19 in the Republic have been aged 75 and over. More than 860 of the fatalities, about 54 per cent, have been nursing home residents.

Explaining why just 40 per cent of the nursing homes inspected in 2018 were checked for compliance with infection controls, a spokesman for Hiqa said that there were 34 regulations covering the care and welfare of residents and each regulation was not checked in every inspection. He said regulations checked on a given inspection “reflected the regulatory history of the centre and information received (solicited and unsolicited) since the last visit”.

Fine Gael TD Fergus O’Dowd wrote to Hiqa chief executive Phelim Quinn on March 27th, as Covid-19 outbreaks were sharply increasing in nursing homes, calling for “the immediate preparation and enforcement of a national plan for the protection of all nursing home residents”.

Mr O’Dowd referred to the non-compliance record of nursing homes on infection controls and to “very disturbing press reports of the utter devastation and deaths caused by this virus in American and Spanish nursing homes”.

He asked Mr Quinn in a follow-up email on April 3rd to publish the plan Hiqa has put in place to “ensure complete control of Covid-19 infections control in nursing homes and other institutions which Hiqa inspect and regulate and also the time-line associated with this urgent action”.

Mr Quinn replied on April 6th telling Mr O’Dowd that it was “the collective responsibility of Government, the HSE [Health Service Executive] and a range of identified agencies to put such measures in place”. He said Hiqa would continue to work with the Minister for Health, the Department of Health’s National Public Health Emergency Team and the HSE and “take necessary and timely action to protect vulnerable members of Irish society”.

Mr O’Dowd, a member of the Oireachtas special committee on the Covid-19 response, told The Irish Times there should have been full compliance with infection controls in nursing homes.

“Nursing homes are very susceptible to infections and influenza; the 18 per cent failure rate is unacceptable; it should be full compliance because that is where the weakness is. If you don’t have 100 per cent compliance there, that means you are not doing your job,” he said.

The Fine Gael deputy said he would be asking questions of Hiqa officials when they appear before the Oireachtas committee next week about what more could have been done to prevent the spread of Covid-19 in nursing homes.

There are clusters of infection in 257 of the country’s 571 homes.

“The question is not so much who is to blame; it is what happened, how did it happen, could we have stopped it, could we have done more and what needs to happen in the autumn,” he said, referring to the risk of a second wave of Covid-19 infections later in the year.