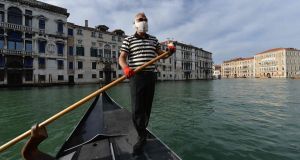 A gondolier on a Venice canal prepares to resume service as Italy eases its cornavirus restrictions. Photograph: Andrea Pattaro/AFP via Getty Images

Roberto Nardin, a 59-year-old Venetian gondolier, is the third generation of his family to take visitors to the Italian lagoon city out on its canals.

With his grandfather first rowing a gondola in 1900, and his father following in his footsteps, the Nardin family have lived through multiple disruptions to Venice’s tourism industry, including the second World War and 9/11 attacks on the US.

“I have been working for 40 years as a gondolier, but I would say I have really been doing it my entire life. From as young as I can remember I would be out on the water with my father, and hear my family talking about gondoliers and tourism. It’s all I know,” he said.

With boat traffic coming to an abrupt halt during the Covid-19 crisis, Nardin says he hasn’t seen the water as clear and clean since he was a child and people swam in the canals.

With Italy preparing to reopen to foreign tourists next month, Nardin and his fellow gondoliers must navigate the tricky issue of how social distancing is going to work aboard a small canal boat. “We are still waiting for the city to come up with guidelines for how many people can fit on a gondolier. It used to be six people but we are sure it will change to be three or four now.”

Venice’s status as one of the world’s most popular destinations, with 25 million-30 million annual visitors to a city with a population of less than 300,000, has long been blamed by many residents for overcrowding, unaffordable housing, and the lack of a non-tourist economy.

This week Luca Zaia, governor of Veneto, the north-eastern Italian region where Venice is located and the heart of the country’s coronavirus outbreak, described the past 12 months as an “annus horribilis”.

“It is essential that the engine starts again as soon as possible,” he said, pointing out that, with an annual turnover of €18 billion, tourism is his region’s largest single industry.

Ana Banda, a 65-year-old who runs the Trattoria Dalla Marisa, a small restaurant opened by her mother in 1965, reopened this week. “People always said there was too much tourism but now they are missing it,” she said. “Tourism is what gives people work here. The city lives on tourism.”

Where once it was impossible to move a metre in central Venice without bumping into a tourist, foreign visitors are now rare.

Earlier this week a German woman came into Banda’s restaurant, to the surprise of her staff. “She was the first foreigner we have had. She was a German woman but she was living in Verona [100km away].”

Still, those who have long opposed mass tourism argue that the crisis is an opportunity to limit the number of visitors and improve conditions for local residents.

Lidia Fersuoch, the president of the Venice branch of Italia Nostra, a conservation organisation, said the city had for decades been treated like “an ATM” by tourism companies that do not care about the impact of their businesses on locals.

“Venice has become a city that has very few prospects for those who actually live here,” she said. “Finding a house in Venice is almost impossible, especially at an affordable price. So many small businesses that serve local residents have closed. We need to take this chance to change things in favour of a more sustainable tourism. We don’t want to have no tourism, we just want a tourism that doesn’t kill the local population.”

Matteo Caroli, associate dean of the Luiss University Business School in Rome, believes social distancing measures will inevitably reduce available capacity in hotels and restaurants, and that this will mean prices will probably rise.

“I think it is possible we return to something similar to what we had 30 years ago, where people went on trips and holidays but they were a bit more expensive and families had to plan them and think about them more carefully,” he said.

“There was already a significant public discussion in places like Venice and Barcelona about how to reduce the number of arrivals and curb mass tourism and so the new constraints caused by Covid-19 could be useful. It of course depends on how the crisis develops but it is possible these cities become more liveable, and less crowded.”

Nardin, who met his wife, a writer called Marie Ohanesian Nardin, when she was travelling in his gondola on a trip to Venice from her native Los Angeles, also believes tourism is essential for the city to recover but agrees that a more sustainable model is possible.

“Venice had become very, very crowded,” he said. “This doesn’t mean it’s bad [that] people come here to visit but probably we have to find a way to regulate it and make it more sustainable.”

It is now a perfect time to visit the city, he said. “This summer will probably be the best summer to come ever. It will be pleasant. Normally in summer it gets hot and too crowded. And Venetians are all very anxious to have customers. They will treat them with gloves, and do more than normal to make them happy.” – Copyright The Financial Times Limited 2020