Covid-19 has made majority rethink dealing with death, survey finds 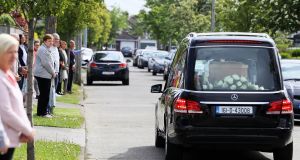 Friends and neighbours of the late Frank McDonald gather outside their homes on Grove Park Avenue in Dublin earlier this month as his funeral cortege passed down the street wherehe lived for 60 years. Photograph: Brian Lawless/PA Wire

A large majority of people believe the Covid-19 pandemic has made the public rethink the way it deals with death and bereavement, a new survey by the Irish Hospice Foundation has found.

The survey by market research firm Behaviour & Attitudes for the bereavement charity found that 68 per cent of people felt that the virus had made people rethink how it deals with death.

The charity has called for “a national response” in the wake of the pandemic and for the next government to develop a new “whole of government strategy” to “end of life care.”

Among the proposals in a seven-point policy document published by the charity is a suggestion that end of life and palliative care services be set up in nursing homes, the sector worst hit by the pandemic, and that people be allowed to die at home or their place of preference.

The foundation also wants the new government to introduce a new national mortuaries programme, to provide community supports on bereavement and to start a new “national dialogue on dying, death and bereavement.”

The document has been sent to all political parties and the new Oireachtas special committee set up to examine the response to the pandemic. It outlines steps that can be taken to ensure policies and supports for death and bereavement are considered in government formation talks.

Residential care facilities, including nursing homes, account for more than 60 per cent of the 1,561 deaths caused by Covid-19 in the State.

Restrictions on public gatherings aimed at stemming the spread of the virus has limited the number of family members and friends who can attend funerals, disrupting the grieving process for people remembering loved ones who have died during the pandemic.

Some 89 per cent of respondents in the foundation’s survey say that being together with extended family and friends is a key part of the grieving process.

A third of people surveyed said death and dying is not talked about enough, while half the people said they feel death is talked about the right amount.

The foundation “believes that, in post-Covid-19 Ireland, there is now an opportunity to equip all of our State services, including health and social care, to meet the challenges presented by the aftermath of this pandemic,” said foundation chief executive Sharon Foley.

“All of us in the voluntary and statutory sectors, along with the wider public row now have a responsibility to shape the future of dying, death and bereavement in Ireland.”

She said that one of the challenges is a “whole of government response to coordinate, replicate, progress and embed innovative, evidence-based solutions” to help in the care of the dying and bereaved, said Ms Foley.

The survey by Behaviour & Attitudes was conducted among 1,010 adults between April 30th and May 11th.