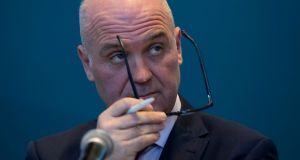 A record daily number of deaths of patients with Covid-19 of 36 people (19 males and 17 females) was reported on Tuesday by the National Public Health Emergency Team.

Twenty-seven of the deaths were in the east, six in the north and three in the south. Twenty-four of the patients were reported as having underlying health conditions. There have now been 210 Covid-19 related deaths in the Republic. The median age of Tuesday’s deaths is 81.

Of the deaths so far, 154 – or 73 per cent – have taken place in hospital, 22 of those in ICU. More than three-quarters (162) of deceased patients had underlying conditions while two men have died for every woman.

The median age of deaths is 81 years and the mean age is 79.

Of patients admitted to ICU, the median age is 61 years. There are currently 138 patients in ICU and 45 patients have been discharged.

About 2,000 Covid-19 samples are being taken daily and it was still the aim to increase capacity to 15,000 a day, but this would take “three to four weeks” to achieve, according to Dr Cillian de Gascun, director of the National Virus Reference Laboratory.

Officials said the wait time for lab test results was seven to 10 days, but there should be “no delay” for people waiting to have samples taken.

An analysis of the confirmed cases up to last Sunday shows the median age is 48 years. There have been 270 clusters involving 1,103 cases. A total of 1,338 healthcare workers have now contracted the virus.

Chief medical officer Dr Tony Holohan said this increase was the result of a more sensitive case definition, which meant people who were more likely to have the disease were tested, including healthcare workers and people in hospital.

The emergency team made a direct appeal to the public not to travel unnecessarily over Easter. It said it was grateful gardaí had been “visibly present” on the roads over the past week “assisting the public with compliance”.

Dr Holohan said it was important to “double down” on the restrictive measures in place in order to get the most out of them.

He appealed to people to “stay the course” and commit to the continuing implementation of the measures.

“While current restrictions have reduced the number of people becoming infected by one confirmed case, this depends on people staying at home and following public health advice.

Dr Holohan said the restrictive measures would not remain in place “any longer than they need to be”. When the time was right, “but no sooner than that”, they would recommend lifting measures but only when the disease was “behaving itself” and measures were in place in testing and contact tracing to ensure cases could be identified rapidly.

Man jailed for three years for ‘barbaric’ circumcision without anaesthetic 18:18
Coronavirus: No new Covid-19 deaths reported in State for first time since March 18:07
Judge to re-watch CCTV evidence in Sil Fox sex assault case 16:11
‘I will be alone for rest of my life,’ says woman raped as she slept 15:47
Northern Ireland reports eight more Covid-19 fatalities 15:10