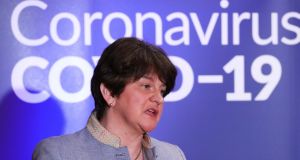 North’s First Minister Arlene Foster: “We recognise Easter is a time when many families would usually get together, but it is essential that everyone continues to follow the social distancing instructions.” Photograph: Kelvin Boyes

There are some tentative signs that social distancing measures are having an effect in tackling Covid-19 in Northern Ireland, the North’s chief medical officer Dr Michael McBride has reported.

As the latest figures showed that three more people in Northern Ireland have died from coronavirus, Dr McBride said on Tuesday there were “emerging signs” the social distancing measures were “making a difference” and saving lives.

“I say this tentatively at this point,” added Dr McBride. But he warned against complacency.

He said, “If we relax those measures we will see again further increases in admissions with patients with Covid-19, further people getting sick and requiring admission to our intensive care unit, and potentially overwhelming our health service.”

The number of people who have died from coronavirus in Northern Ireland has increased by three, bringing the total number of fatalities in the North to 73, the Public Health Agency (PHA) reported on Tuesday afternoon. The new figures came as an MOT centre in Belfast was reopened as a drive-through Covid-19 testing facility for healthcare workers.

The PHA also reported 97 new confirmed cases of Covid-19, bringing the total number of positive cases in the North to 1,255.

So far 9,158 people have been tested for coronavirus.

Of the 72 deaths for which there was data, 38 were female and 34 male. The median age for deaths in Northern Ireland is 81.

Of confirmed cases with data, 665 were female and 589 were male.

The Belfast City Council area had the most number of positive cases (396) followed by Lisburn and Castlereagh, a considerable portion of which takes in the greater Belfast area (143), and Armagh, Banbridge and Craigavon (120).

Derry and Strabane recorded 52 confirmed cases while the lowest number of cases was in the Causeway Coast and Glens council area (32).

The North’s Minister of Health Robin Swann said on Tuesday that 96 people with Covid-19 symptoms were admitted to hospital on Monday and that currently 55 coronavirus patients were receiving critical care in hospitals.

He added that hospitals had 191 ventilators

Meanwhile, Sinn Féin Deputy First Minister Michelle O’Neill said healthcare workers had told her they were “frightened” of the threat from Covid-19.

Ms O’Neill and DUP First Minister Arlene Foster were briefing an Assembly ad-hoc committee on Covid-19. Ms O’Neill said that “good progress is definitely being made in securing more personal protective equipment, and this remains a top priority for the Executive”.

With the surge in coronavirus expected up to April 20th, Ms Foster urged people to continue to stay at home as much as possible. She also warned against people socialising at Easter or travelling to holiday homes or caravans.

“We recognise that Easter is a time when many families would usually get together, but it is essential that everyone continues to follow the social distancing instructions, as they did over Mother’s Day,” said Ms Foster.

“This will help protect those who are most vulnerable in our society, as well as those who are working so hard to look after our health,” she added.

Sinn Féin speaker Alex Maskey did not chair the ad-hoc committee meeting. In a message he explained that, because of a cardiac condition, he had received medical advice to stay at home for the next 12 weeks. He said he would be working from home in the time ahead.

During the Assembly questioning of Ms Foster and Ms O’Neill, the UUP MLA Mike Nesbitt called for greater courtesy by members. He said, “Loving each other may be a bit of a stretch but for God’s sake we need to show each other a bit of respect.”