Rise in unopened, past-sell-by-date food waste as well as greenery from gardening 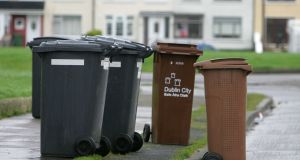 It is estimated, in normal circumstances, Irish households throw out between €400 and €1,000 worth of food annually. Photograph: David Sleator

Bin collection companies are linking a “record” surge in household waste to overbuying at supermarkets during the coronavirus crisis.

While people staying in and working from home during the lockdown would be expected to buy more food than usual – given the closure of restaurants, cafes, delis, work and school canteens – waste firms say there has been a noticeable rise in the volume of unused food being dumped.

A report from data company Kantar on Monday said that March was the busiest month on record for grocery sales, with fresh food sales up 16 per cent.

Greyhound, one of the country’s largest bin collectors with 120,000 customers in Dublin, said it was dealing with “a record 38 per cent increase” in brown bin waste since people began working from home in large numbers and restrictions such as restaurant and cafe closures were announced. This equates to more than 200 tonnes extra.

While the brown bins also take garden waste, such as lawn and hedge clippings, Greyhound managing director John Brosnan said there was more unused food being thrown out.

“We are seeing a large increase in unopened food waste, which could be the result of panic buying,” he said.

Greyhound has also seen a 10 per cent increase in the amount of general waste being put in black bins.

The City Bin Company, which operates in Dublin and Galway, said it has seen the amount of brown bin waste collected rise by 68 per cent over the past two weeks. However, managing director Niall Killilea believes garden waste accounted for a significant amount of this increase.

“It’s not only the Covid-19 impact. We did have a few days of nice weather and that allowed people get out and mow the grass or trim the hedge, so there is a lot of garden waste in there too,” he said. “But overall, there has been a very noticeable rise in all waste, and in particular from the brown bin.”

Mr Killilea said he was more concerned about the increase in black bin waste – up 18 per cent for his company over the past fortnight – as householders are increasingly throwing out packaged and processed food past its sell-by date.

“If you have a packet of ham that has gone off, that typically finds its way into the black bin,” he said. “Most people don’t separate out the food waste and separate the hard plastic from soft plastic and a lot of people are still uncomfortable putting cooked and raw meat into the brown bin, unfortunately.”

It is estimated, in normal circumstances, Irish households throw out between €400 and €1,000 worth of food annually. With panic buying bringing supermarket sales to record levels and more people preparing food at home a greater proportion of the time due to the restrictions, that figure could rise.

Food waste dumped in black bins that end up in landfill sites releases methane, a greenhouse gas 25 times more potent than carbon dioxide. Brown bin waste is typically taken to one of Ireland’s 10 or so composting and anaerobic digestion plants.

Percy Foster, of Cré, which represents the composting and anaerobic digestion industry, said it would be another two weeks before accurate data was available on the increase in food and other organic waste, but some plants were already seeing a 15 per cent increase in loads.

“I would urge caution with this figure as we need more time to see the trend,” he said.

Mr Foster said the plants were well able to cope with the rise in household food and organic waste as there had been a “dramatic” decrease in commercial food waste, which is freeing up capacity.

Arnold Dillon, of Retail Ireland which represents supermarkets and other grocery outlets, said an “elevation in demand” was down to some “confusion” and “nervousness” over the tightened movement restrictions but that this had since “levelled off”.